Shoot for the Moon! 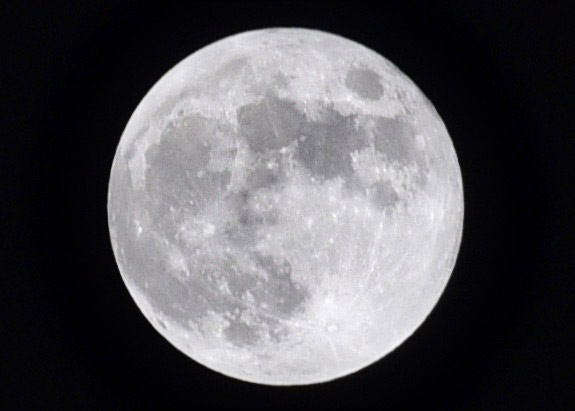 "Shoot for the moon, you might get there"
Buzz Aldrin

Last night was a triple treat in the world of Astrology! On the menu ~ A full moon (called a Snow Moon when it appears in February); a lunar eclipse and even a comet! Around 12:30 AM, while surfing the internet, I happened upon a photo detailing one of  these astronomical appearances.  Donned in pajamas and slippers, I grabbed my trusty sidekick (camera),  found the largest, zoom lens in the camera bag, turned off all lights in the house, and ran outside. Lady luck was with me, and overhead in the jet-black, night sky, loomed a perfectly round, beautiful, snow-white, glowing moon.  My zoom lens is at least five years old and zooms to 300mm, which in the world of zoom lenses, is not that great. Thinking this would be a wasted effort, as many of my previous attempts to capture the moon's beauty have been, I did not have much faith the results produced from all this effort. The thoughts that were really flowing through my mind were, "You really should back in that comfortable bed of yours, but now that you are out here, lets give it our best shot!" So I did; I focused, zoomed, adjusted aperture, changed ISO, switched shutter speeds, and much to my surprise, some very nice photos actually appeared. Once I settled on the best shutter-speed and aperture,  the slightest adjustments to ISO made a real difference in the details, and what they say is true,  "the devil is in the details"! Until the photos were uploaded to my computer, I didn't think my Snow-Moon photo was that great...and this may not be "that great", but it is the best photo of the moon I have ever shot...thus it is "worthy of the Blog"! This is a running joke in my house; if you do something that "makes the blog", you have really accomplished something outstanding! As for the other two lunar events,  when I discovered the lunar eclipse occurred earlier in the day, around 4:00 PM, and the comet was seven million miles away, therefore, barely visible to the naked eye, my disappointment of failing to document them waned. One more accomplishment occurred in this post...look how short it is! Curbing my long-winded descriptions of life's adventures is
a challenge for me, and my new goal is to say more with less!
In fact, I could have said it all with these simple, seven simple words!

"The full moon - the mandala of the sky"

Posted by Only in Louisiana ~ documenting the adventures we call Life! at 3:02 PM