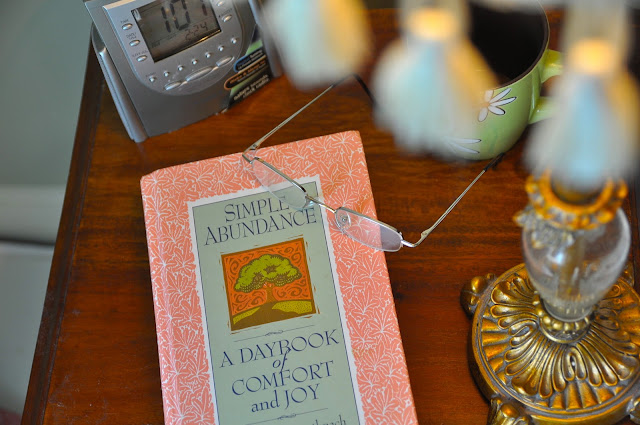 Why must you lose something to really appreciate its worth? And why does it always surface when you finally break down and replace object that you have lost or broken?
Have you noticed that????
This even extends to animals!  We have a barn cat named "Apple Juice" (the girls named him thirteen years ago) and he keeps all the mice away in that fabulous red barn you see in my header.  One day, Apple Juice did not come out to see me when I walked up to the barn...we looked high and low for A.J. with no luck.  Having owned him for ten years, we were heartbroken that he was missing.  After four months of waiting for A.J. to come home, it was clear that he was gone for good and our barn was in desperate need of another barn cat.  My friend Anne, (Fred ~ the goat's owner!) had a cat that "adopted" her and she offered to bring it to me.  Do you know that the very day she brought that cat to me, Apple Juice walked right up to my back door and meowed like he has never left us! It was the strangest thing in the world, but we were elated.  Apple Juice is still healthy as can be and had never
left us again...he is now turning fourteen!
Back to the topic of my post!
I have been reading Simple Abundance for over ten years...it is a book that you can read, every day, every year, for life.  You will never tire of it.  Sarah Ban Breathnach, the author, was inspired to write it from a quote by Toni Morrison ~ "If there is a book you really want to read, but it hasn't been written yet, then you must write it. ".   Seven million copies later and a # 1 New York Bestseller,
it is on many a bedside table! 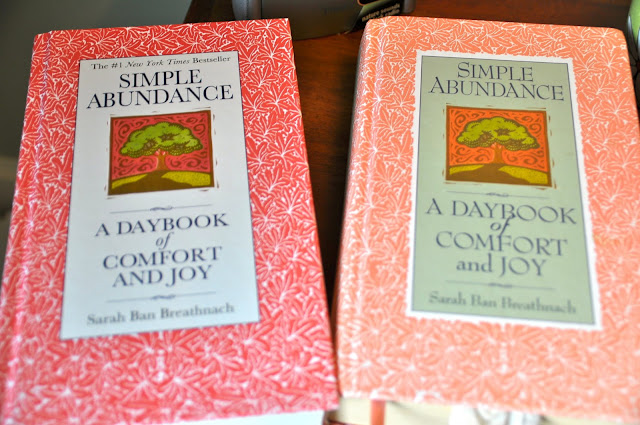 This summer, as I was traveling to and from, I lugged it all over the place.  School started and some time went by before I realized that I did not have my copy of Simple Abundance...so I went looking for it.  Unsuccessfully.  However, I didn't worry too much ~ things usually surface, it took Apple Juice four months, right?  I kept my eyes opened for it, but no luck.  About two months ago, I started looking in earnest...under beds, I cleaned out my car, asked my mother if I left if in Tennessee, and had a sinking feeling in the pit of my stomach.  Sure, I could buy another copy, but after ten years, this book is an old friend of mine.  She can't be replaced....and I really didn't realize all of this until she was gone.
Last week, when I visited my mother, I was able to look at my house in TN and assure myself that SHE was not there .  I had been holding out hope, but now even that was exhausted.  Tired of not having my daily, uplifting essays, I walked into a bookstore and bought another copy. The copy I bought was the ten year anniversary copy and had a
preface in it by the author which I found quite interesting! 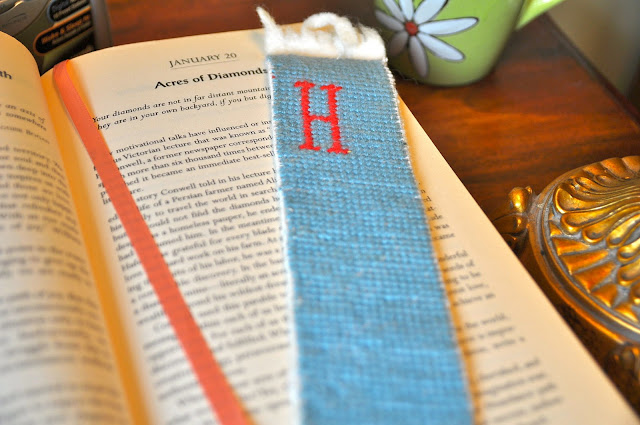 Sarah Ban Breathnach was a nationally syndicated columnist and the author of two previous books, but finding a publisher to take on the 957 page manuscript of Simple Abundance  was a demoralizingly difficult battle.  The proposal was turned down thirty times over a two year period. The reasoning behind the rejection? Simplicity wasn't commercial, and a lifestyle book based on gratitude? Forget it.
Many years, seven million copies, and thirty languages later suggest a different story.
Two fun facts that I didn't realize:  Sarah Ban Breathnach fought hard for two items in the book:  the pink ribbon bookmark and the fact that the pages are not numbered!  I didn't even realize this until I read the anniversary preface!  Her reasoning is..... "no woman on the face of the earth would ever allow herself to buy a book over five hundred pages, let alone read it.  Instead, I asked if there could be a ribbon bookmark, so that the reader
could keep her place.  To this day, I don't know how long it is"
My new anniversary copy, however, did not have the ribbon in it!  I have a feeling that it is just too cost prohibitive, as books are having to be sold so
inexpensively to stay in line with E-readers.
Now, the fact that my book did NOT have a ribbon,  only fueled my fire to
FIND MY COPY!!!!!!
When I returned home, I searched my house yet again....and do you know, I found it behind another book, hidden from view in my livingroom bookshelf! I was so excited.....like I said, I really never appreciated it before, but boy, oh boy, do I ever now...especially, now
that I know about that ribbon book marker!
In it is the needlepoint bookmark I made with my grandmother....another very sentimental memory! 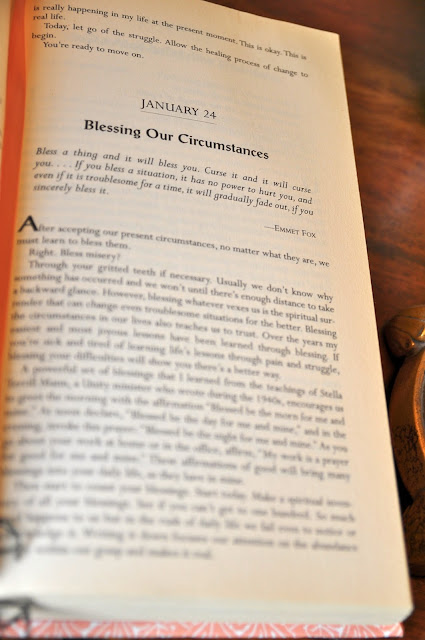 See  ~ no numbered pages! I have had this book forever and NEVER noticed that! 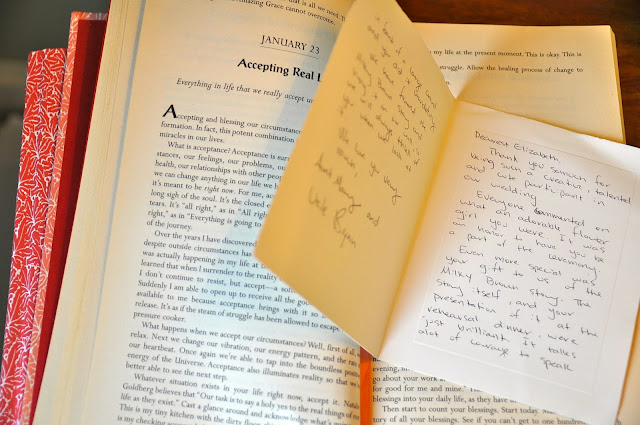 My mother taught me the trick of taking sweet notes and tucking them into cookbooks and other books that you will pick up from time to time (such as coffee table books).  When I found my Simple Abundance book, this sweet note from my sister to Elizabeth was in it..(so glad I didn't lose it either), it is a note thanking Elizabeth for her speech at their rehearsal dinner ten years ago...Elizabeth was eight. 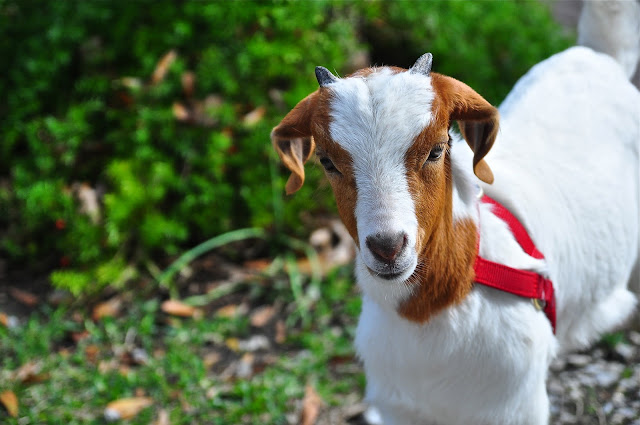 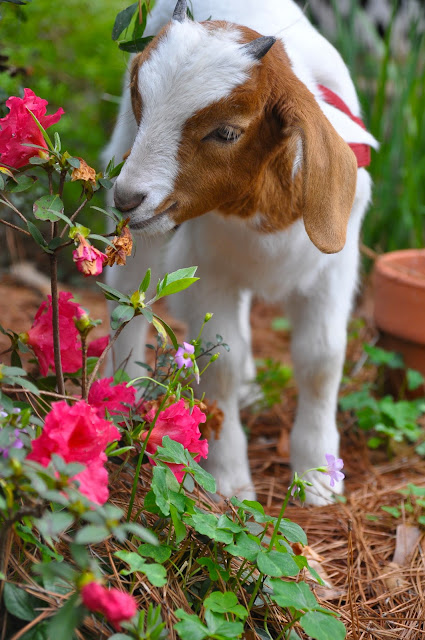 Due to our freakish, warm weather...everything is bloom and Fred really likes flowers! 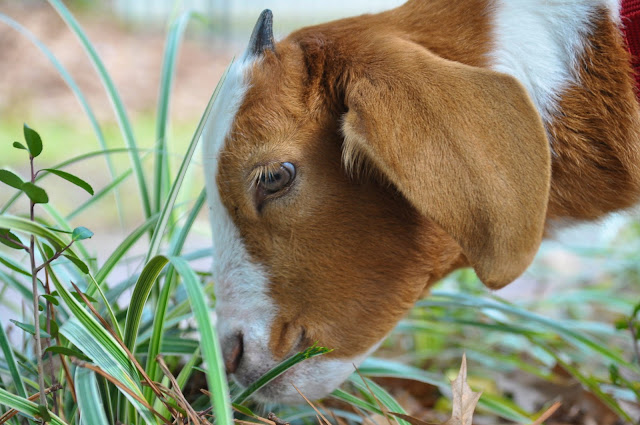 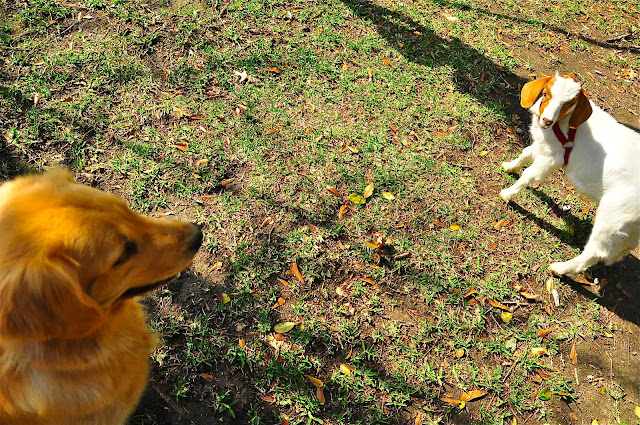 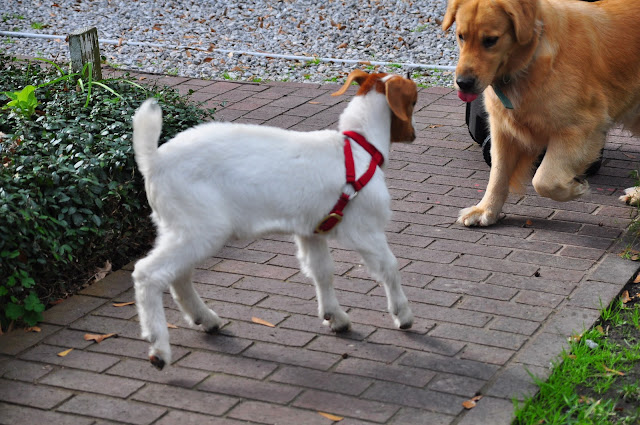 They got along quite famously 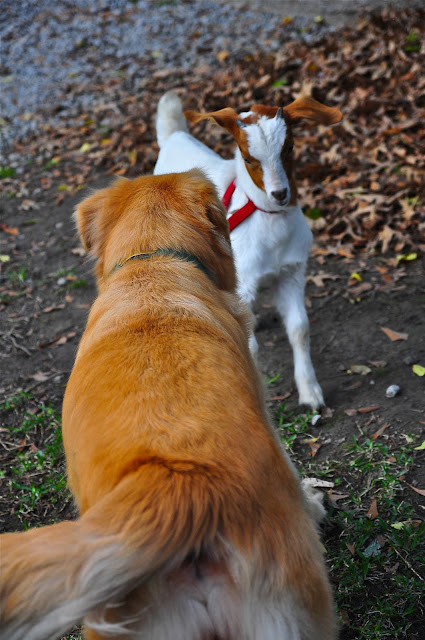 Much better then I expected 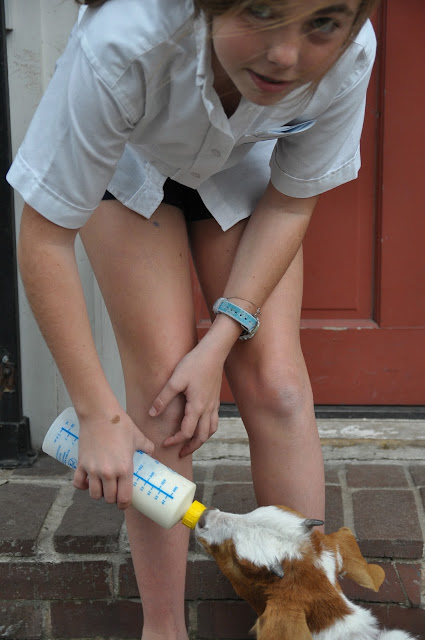 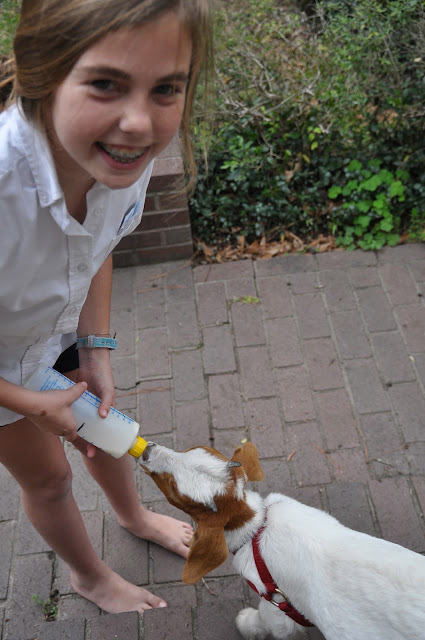 Now that is one happy girl 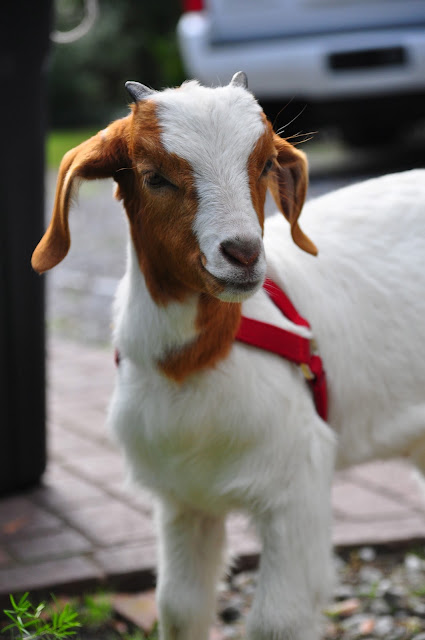 and one happy goat!!!

Posted by Only in Louisiana ~ documenting the adventures we call Life! at 6:28 AM