Sorry for the slight delay in announcing the winner of the Funky, forky bracelet givaway...I was all set to wake up early this morning and have it ready for around 7:00 AM but my little ole Mac had other ideas.....in fact, it was acting so strangely, that I turned it off (my professional solution to any technical problem) and much to my dismay, it would not turn back on!  Very distressing to say the least...however, I recently discovered "Time Machine" and set it up (yay for me) so just about everything is backed up except the past few weeks.  Hopefully, if there is a major problem, they can get the rest of the info off the harddrive. It is at the hospital (Apple store) right now, so I hope to know something shortly...I rushed it right over as soon as they opened! Anyways....I am using Sara's PC and am back online...but enough about my problems...lets move on to the
winner of the Funky, Forky bracelet!﻿ 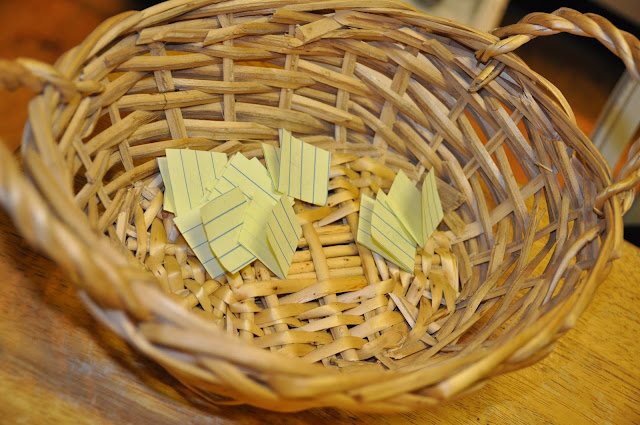 In high tech style - I wrote your names down and put them in a basket! 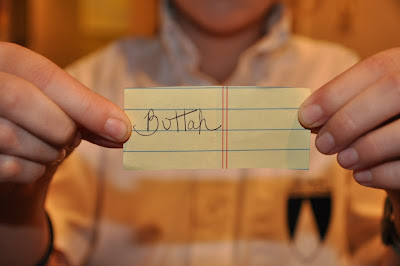 Unfortunately, Sara could not be here for the big drawing so she appointed Ellen to do the honors and the big winner is.........Buttah!  Congratulations - I hope you enjoy it! Thanks to all who left such nice comments! Buttah, if you will leave me a comment with your email address, we can contact you and will send it your way! 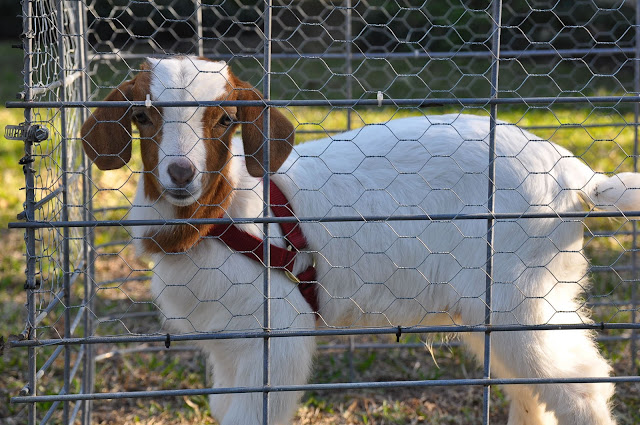 Today is a bit of a bummer because of the computer but yesterday was a hoot....my best friend, Anne, has a baby goat and she needed a "goat-sitter" to watch and feed the goat while she was running some errands.  Since Ellen has been yearning for a goat, and we are an animal loving family, she knew she could just leave a message, leave the goat in a pen in the yard, leave the milk bottle and leave her worries behind! I wasn't home for the goat drop-off and when I pulled up to the house, was greeted with this adorable little sight - and he was HUNGARY! 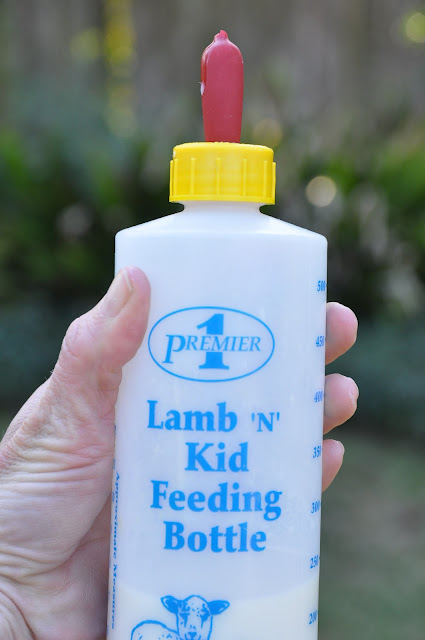 Ellen was still at school, so I got right on it....

Please appreciate these photos - it is not easy to feed a super, hungary, baby goat and
try to take blog-worthy pictures! 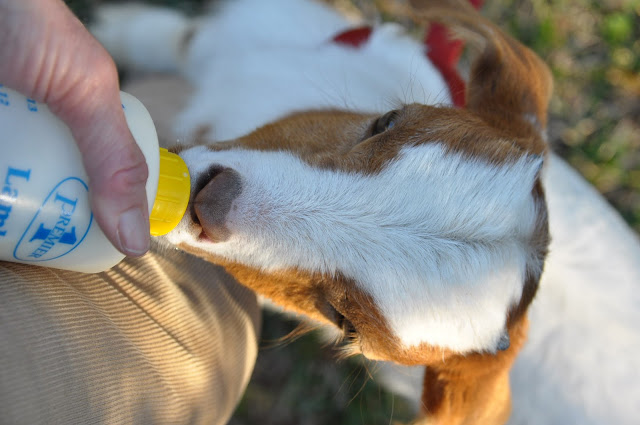 He sucked this bottle down in no time flat 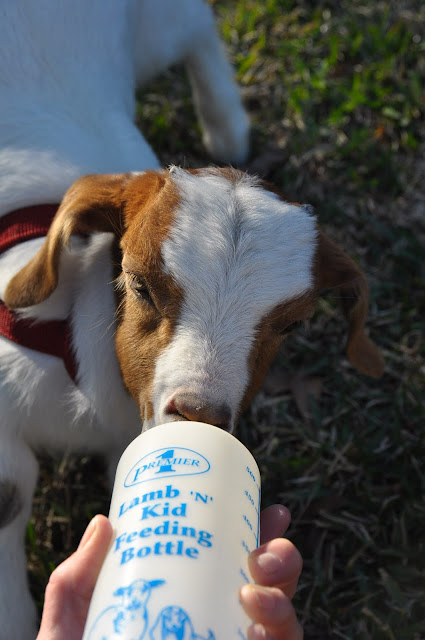 Literally, I think all told it took about two minutes, and that was because, I would stop
to try and get a better shot with the camera! 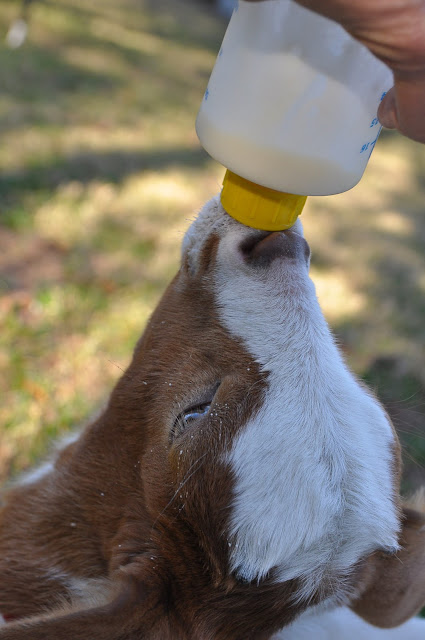 That is what you call "Good to the last drop"! 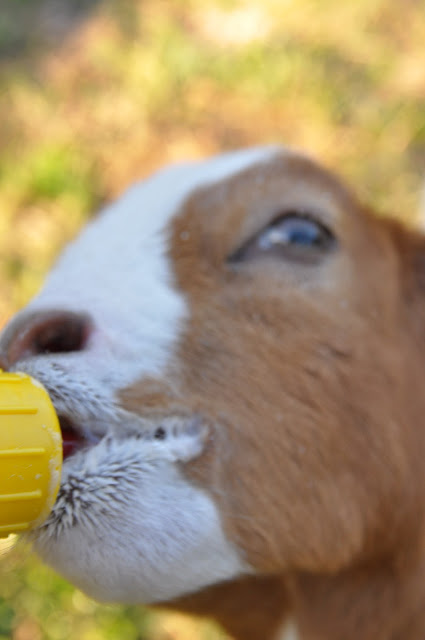 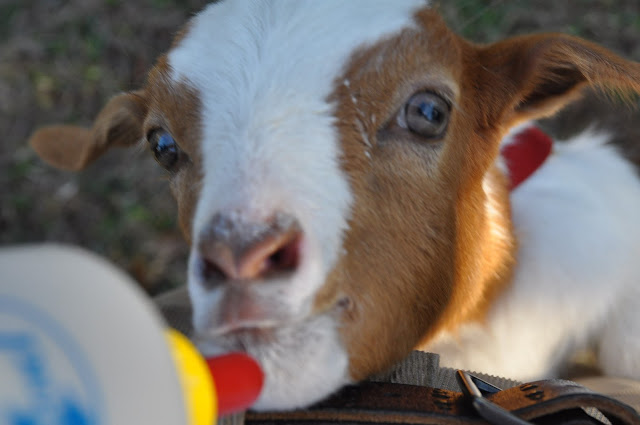 He was very sad when he was finished...I had to hide the bottle! But just like a baby, 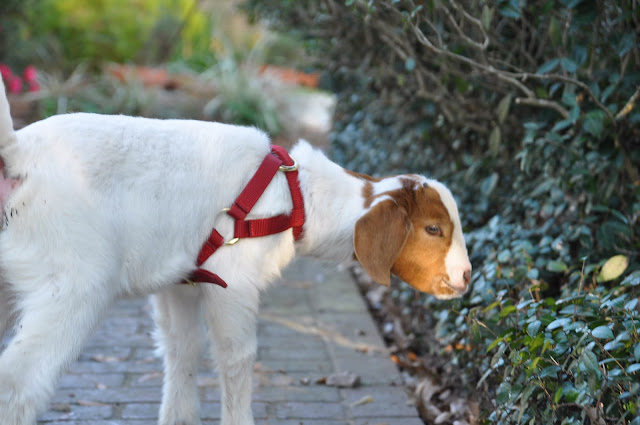 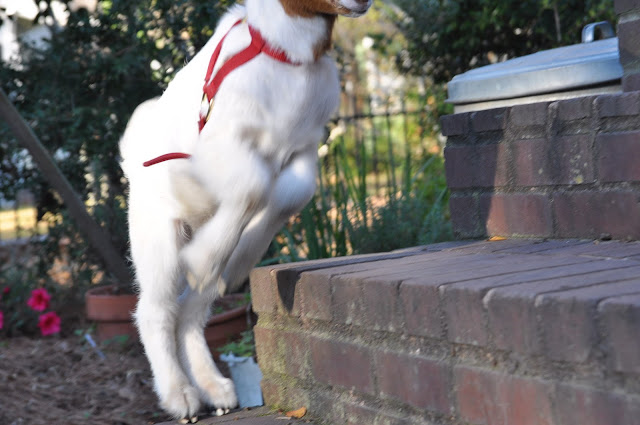 My steps were of particular fascination - I think the "hillbilly goat" side came out of him! 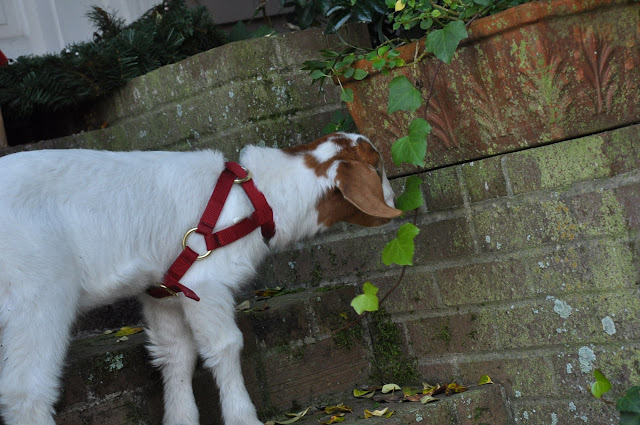 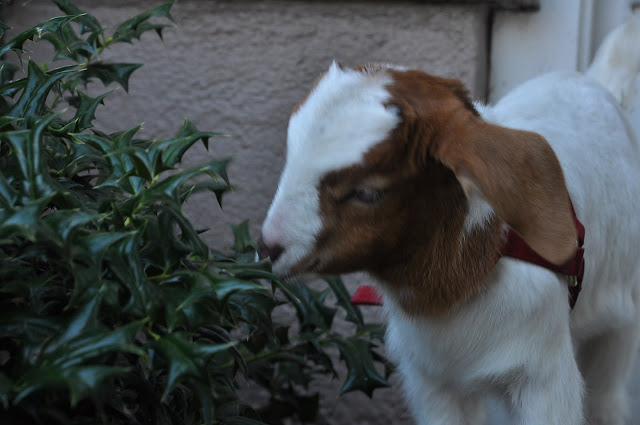 Fred DID not like Holly bushes - (wonder why)....also, while I am thinking about it, please ignore the terrible photography in some of these shots...I discovered that goats are super-hard to photograph! They move at lightning speed, and are always hopping, twisting and turning....and since I made a vow not to turn my mode off of manual, some of my photos are not so great....
Fred, you gave me a challenge! 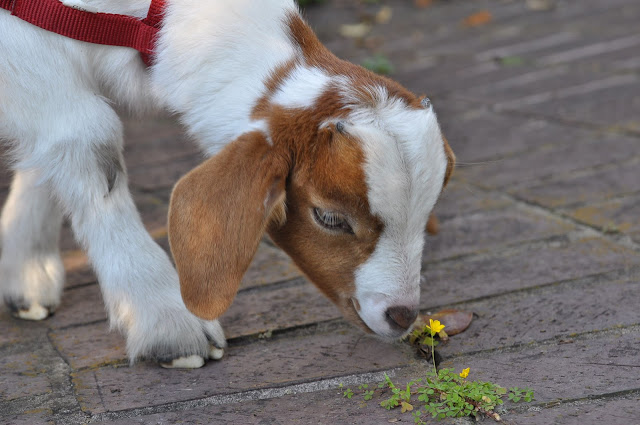 Fred really likes flowers....good thing he lives on a farm with an owner that LOVES to grow flowers - right Anne? Anne, I am just going to give you two words of advice for this Spring....
STRONG FENCES!
Fred and I played and played outside.....we really did have a ball and I was so sad that Ellen had drama practice after school as she was missing all the fun.  I secretly hoped Anne would take a LONG, LONG time running errands.  Maybe she would even let Fred spend the night? 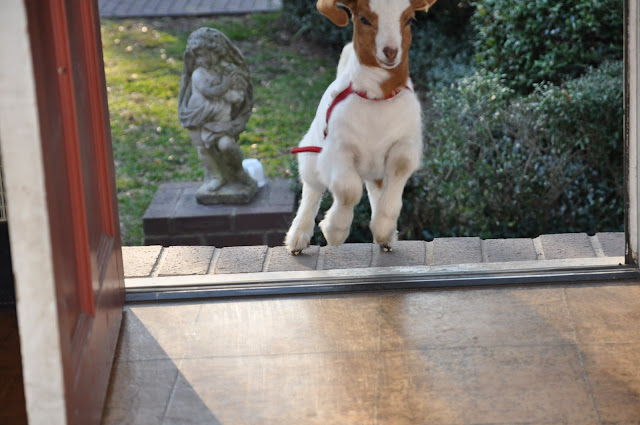 After a time, I needed to go inside and didn't want to leave him all by his lonesome, so I invited him to come inside with me...I think he was quite excited by this invitation!
He actually leapt through the back door. 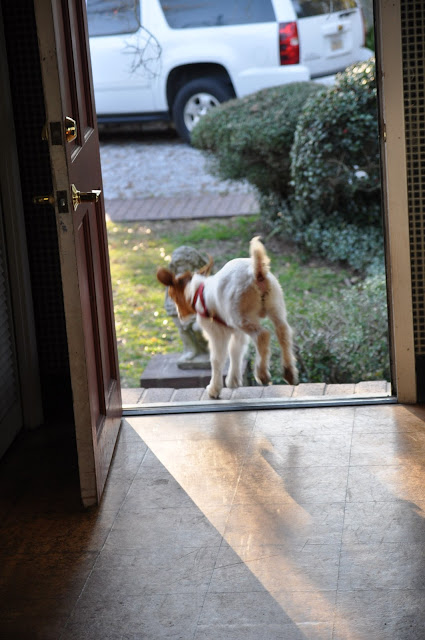 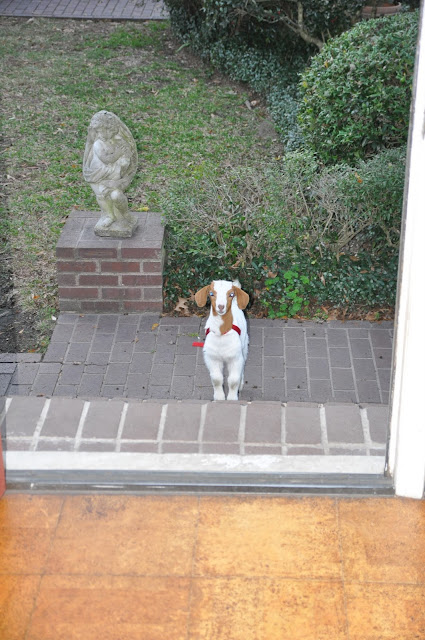 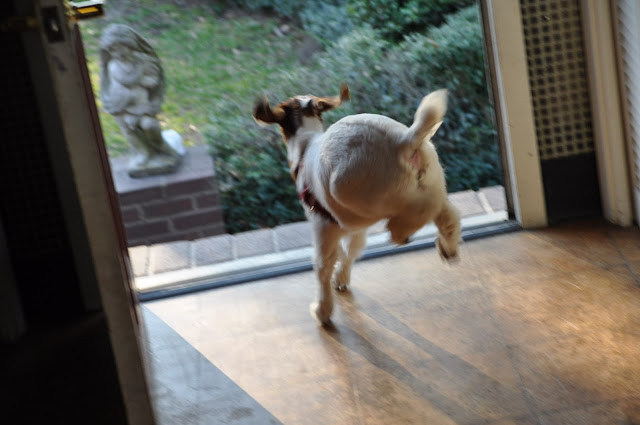 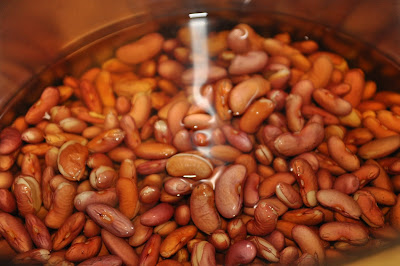 I had been soaking red beans and wanted to get them ready for dinner, but how could I stop to cook when there is something this cute to watch in action? 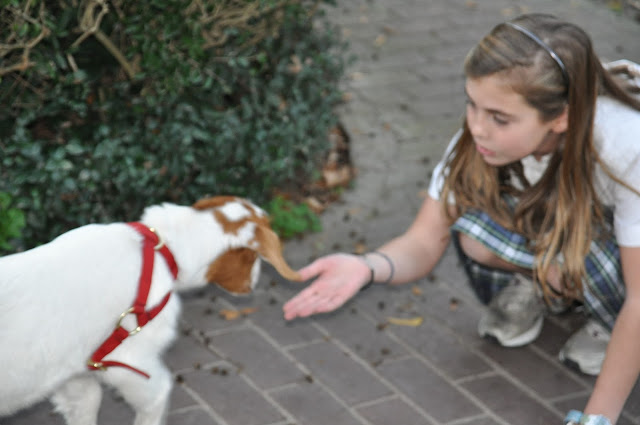 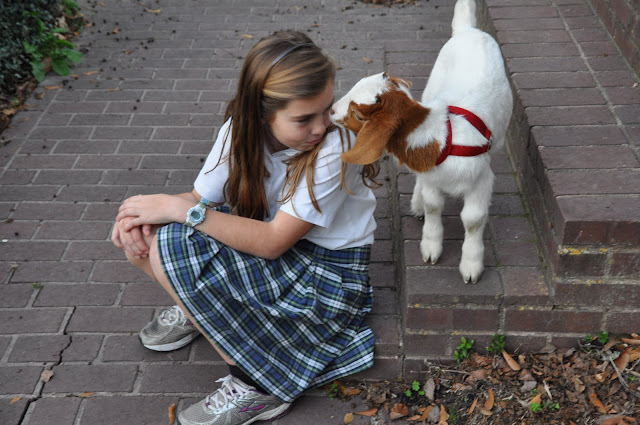 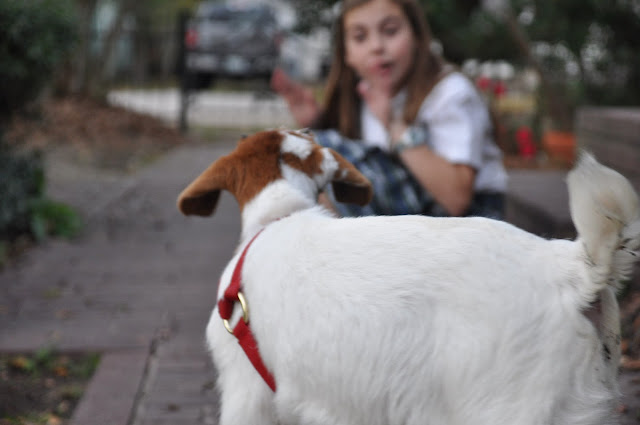 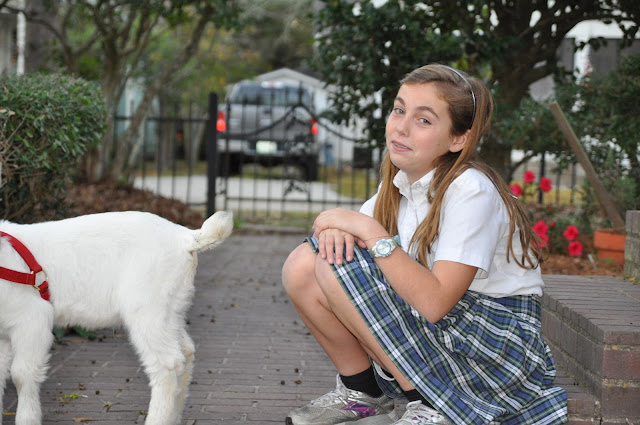 This was the look I got when I suggested maybe we could share Anne's goat! 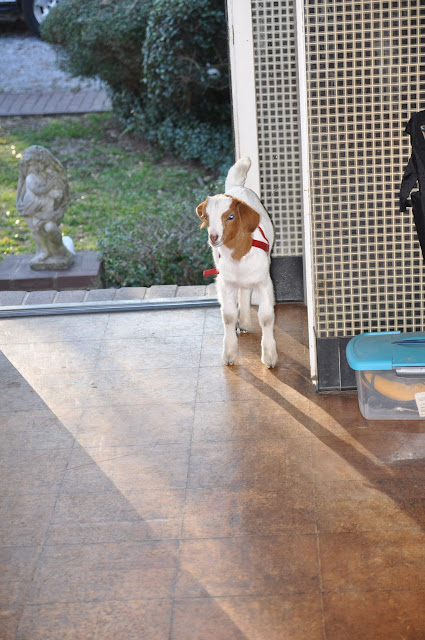 Now Fred, he really feels right at home with us....I think he is ready to move in.
This photo was taken right before Fred decided that the table was his next target to leap onto and in one flying leap he gracefully made it on top of our kitchen table.  One of his tiny hoofs landed perfectly in the hummus dip we were enjoying with crackers as we were laughing at Fred's antics...that is until he destroyed our hummus! Then this goat sitting Mama decided to take matters into her own hands. 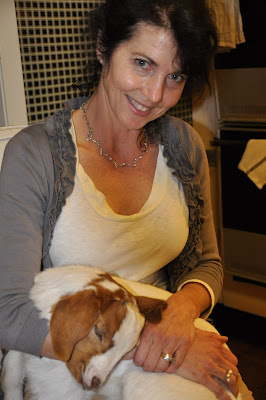 Like any toddler that has has been over stimulated and played with a bit too much, Fred needed some quiet time...so I cradled him in my lap.... 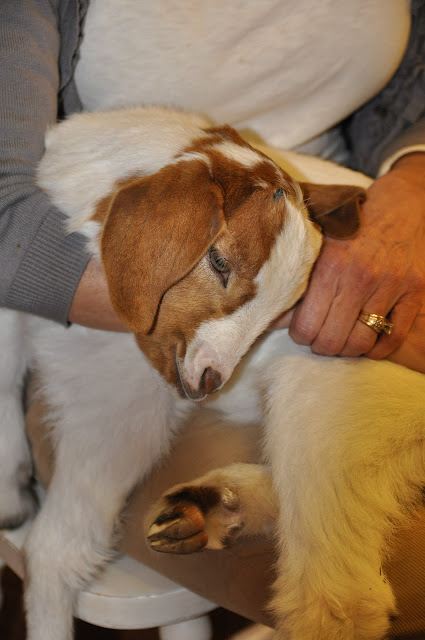 held him calmly and stroked his little head.....and in no time at all 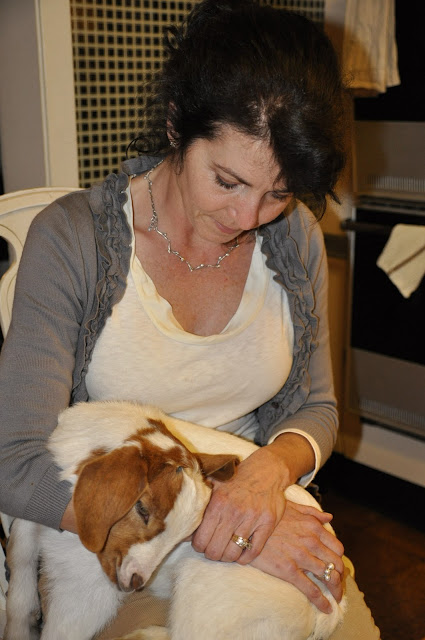 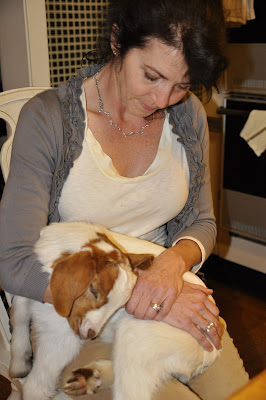 and I remembered what the best present God gave to his Mamas on this earth was......
NAPS for the tired little ones!!!!

Posted by Only in Louisiana ~ documenting the adventures we call Life! at 1:05 PM