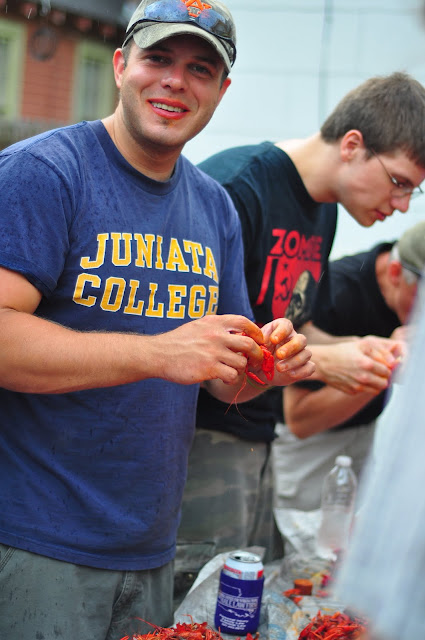 Let me introduce you to "Gator Boy"....my goal with this blog is to keep somewhat of a family journal while highlighting unique and interesting things that happen "Only in Louisiana"!  Gator Boy is one of things that makes life interesting around these parts!  We will start with his graduation party!  Lest you judge him by the nick name we have bestowed upon him, and think that he is some crazy, gator wrestling, beer drinking, wild man ~ you are correct...but he is all that while just having earned a masters in Biology and on his way to having a PHD under his gator skinned belt! 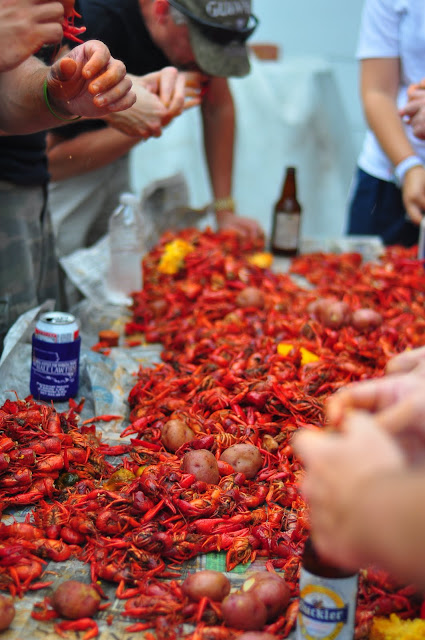 Here in Louisiana, we celebrate everything by eating crawfish (and drinking beer) and this was no exception! This is Gator's graduation party!  Gator has caught and studied many members of the alligator population in Louisiana ( he is originally from Connecticut; but we don't hold
that against him anymore). 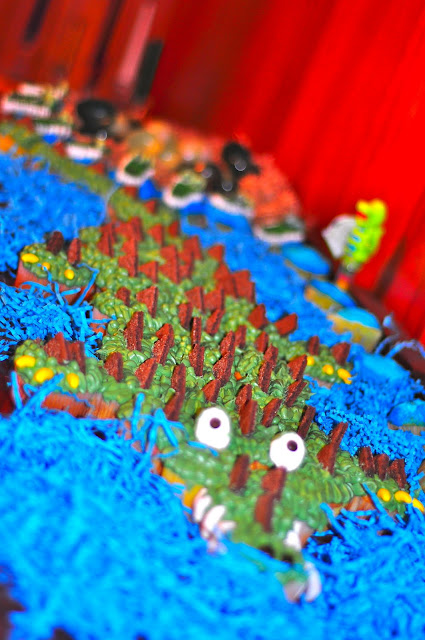 This cake, prepared by Laura and Caroline,  is made entirely of cupcakes.  It was the actual length of a real alligator and was worthy of "Martha Stuart" If you are an avid reader of my blog  - all ten of you - you will remember seeing Laura and Sara'a cake creations - I have documented several of them, but none even come close to this. 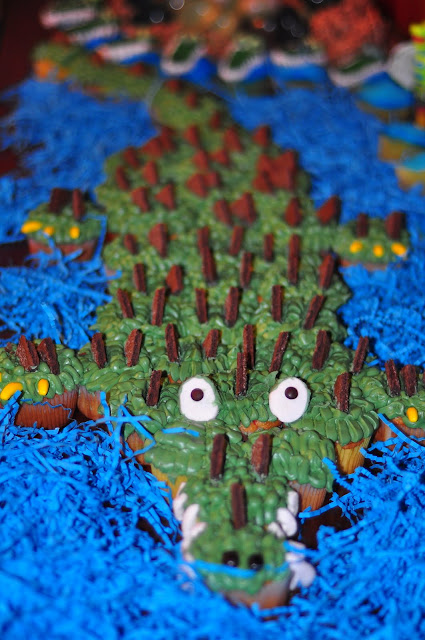 As you can see, no detail was spared! 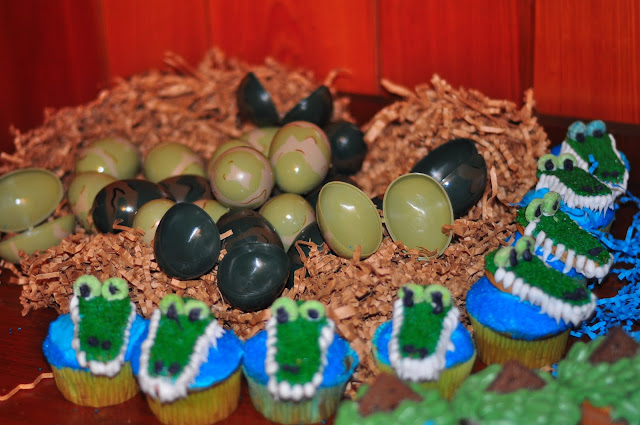 Down to the alligator's nest, with eggs and baby alligators 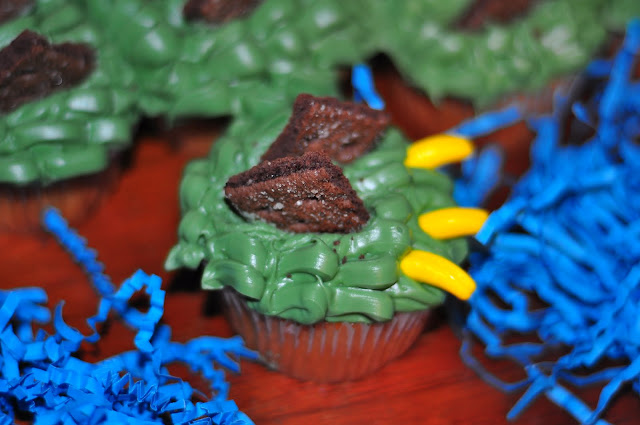 Just to give you an idea of the detail that went into the six million cupcakes it took to create this masterpiece......here is just one of the cupcakes! 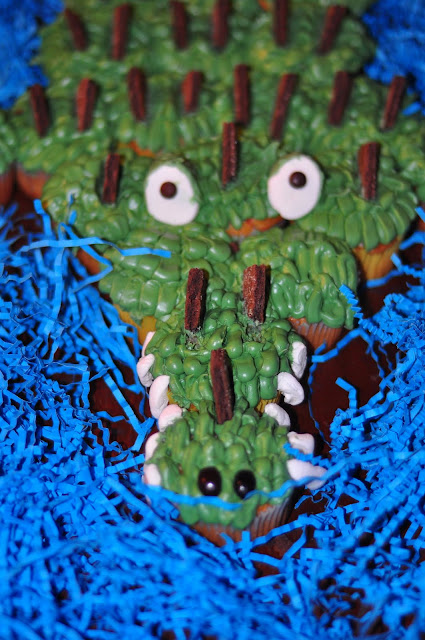 It was so amazing that no-one could bring themselves to eat it!  Cakes like that should be able to be permanently preserved.  Hey, I guess I am kind of doing that right now! 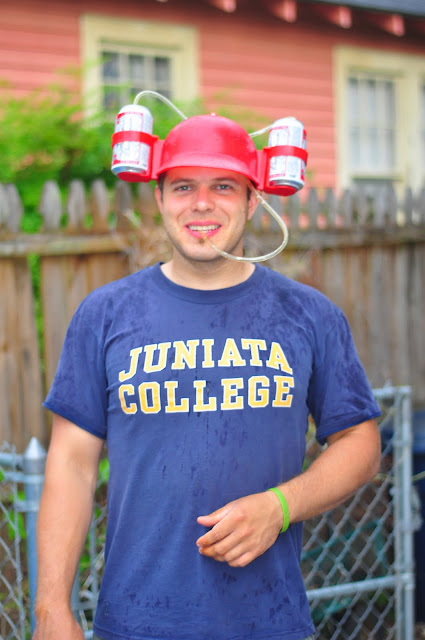 Every graduate must wear the hat, drink the beer and sign the hat  for posterity.  A graduation ritual that many have gone through before "Gator" and many will go through in years to come.  I may go get my masters in Biology just so I can wear that hat! 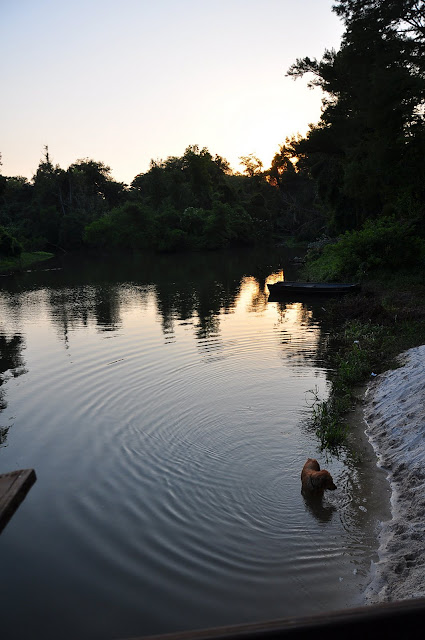 It is a good thing that we have a friend like Gator.  See that beautiful, calm, tranquil river? 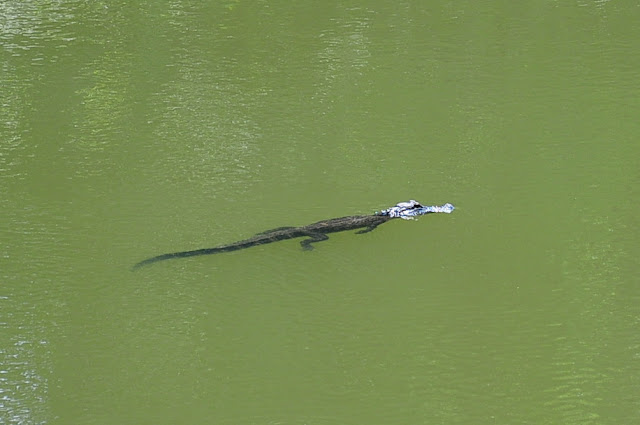 We have a friend that has moved in and doesn't know when to leave.  Seriously, we are kind of used to alligators here in Louisiana.....but this little or should I say ~ kind of big ~ fellow is not scared of us.  Not one little bit.  Every bit of five feet, he comes and goes as he pleases, and just floats around the river staring at us with his big ole, googly eyes. 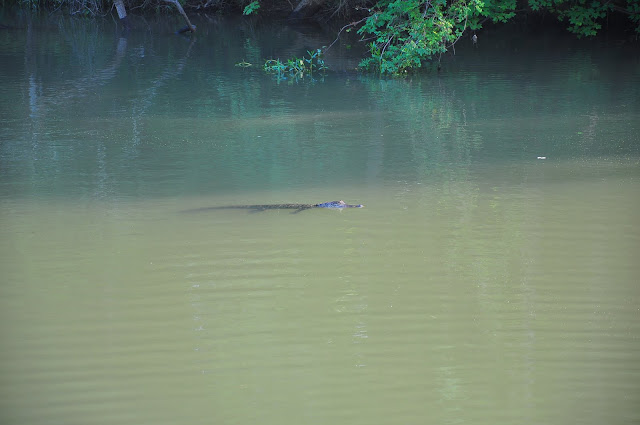 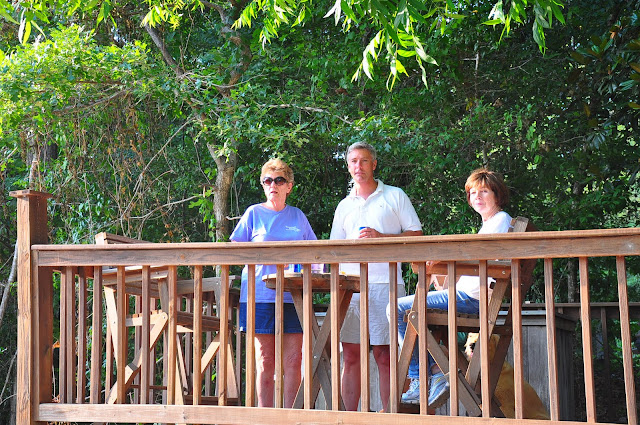 It is better than television - we watch him and he watches us for hours. 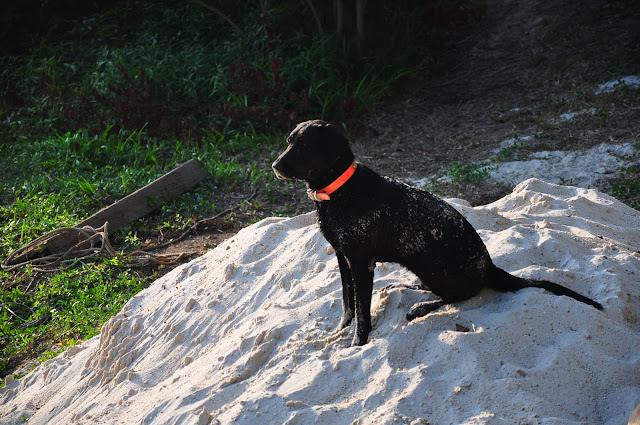 Even the dogs don't want to go in the water when Ally - Gator is on the prowl. 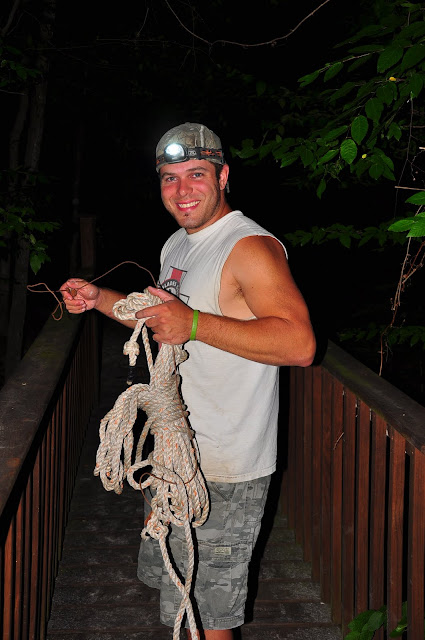 Finally, when I realized that our uninvited guest was here to stay, I called Gator Boy - and this is how he arrived....folks - this is the real deal.  Don't worry - even though we don't like Ally - Gator...we wouldn't harm a hair on his ugly hide.  Gator was just going to give it a good scare so it would relocate to other parts of the river. 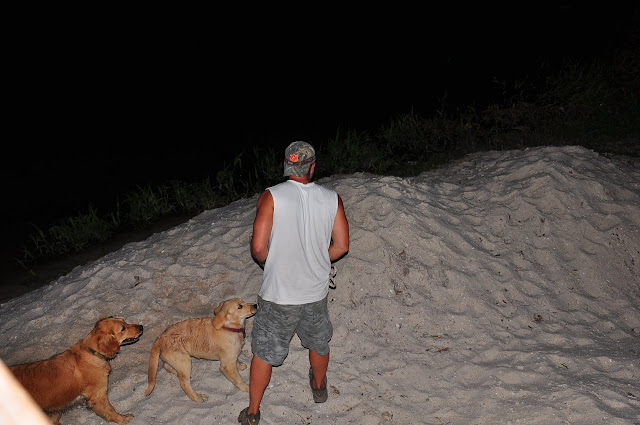 This guy can actually jump on a live mama alligator, tie her up, weigh and record her eggs, tag the Mama and record data on her, and then let her go and leave in one piece. And any one that knows their gator trivia knows that YOU DON'T MESS WITH A MAMA GATOR - unless you are Gator Boy. 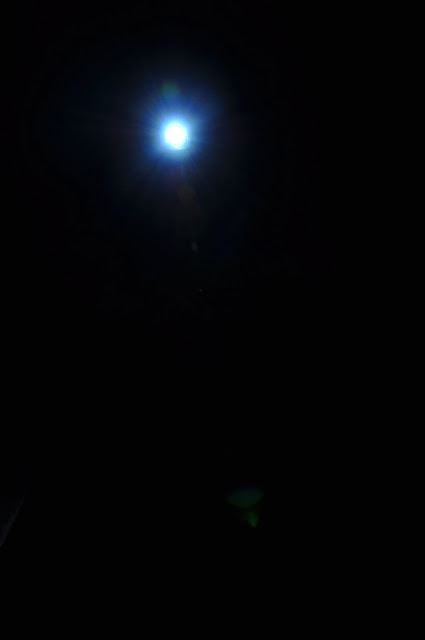 This is him in the river - searching for Ally 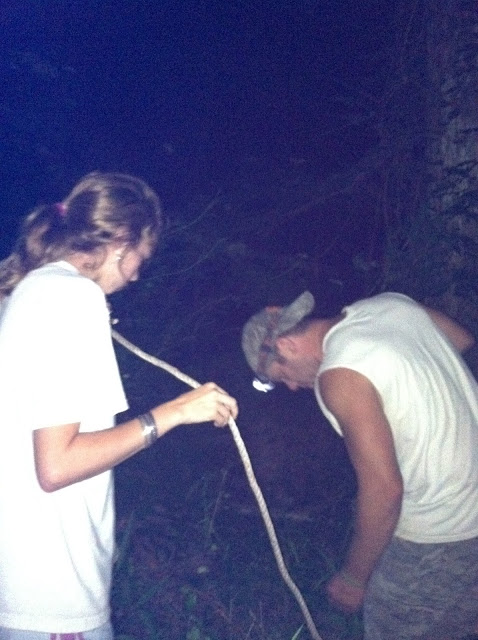 Elizabeth and Gator got in the canoe and searched but Ally decided he wanted no part of this! He disappeared but returned the next day.
To our dismay - we are still sharing our river with an alligator and that is not fun. 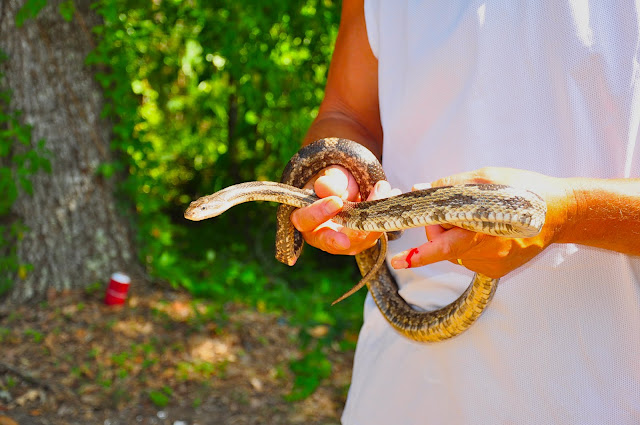 And, should the gator wrangling not impress you - this was at our Memorial Day party.  They noticed this little fellow in the woods - it is a harmless rat snake. 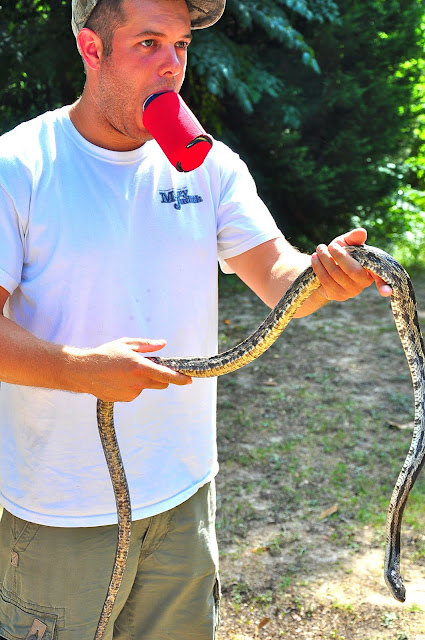 One of the classes you take when getting your masters in Biology is how to hold a snake without putting down your beer. 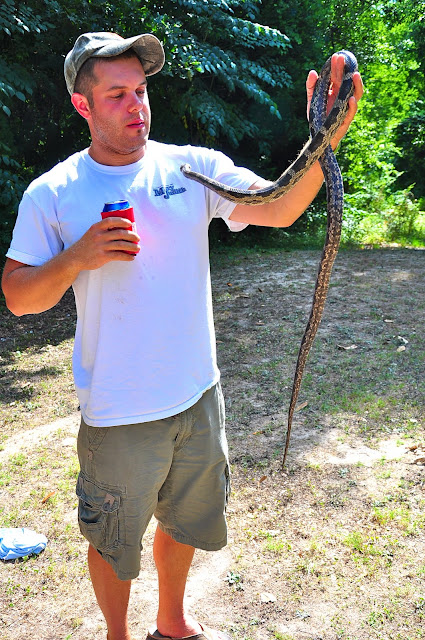 Give Gator a big hand - I think he deserves it...OK - show is over! 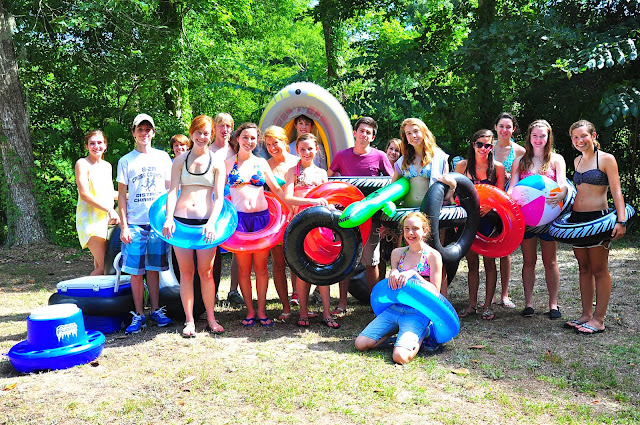 Alligators and snakes did not stop this crew from having a blast on Memorial Day - Tubing and Capture the Flag were the big items on the menu. 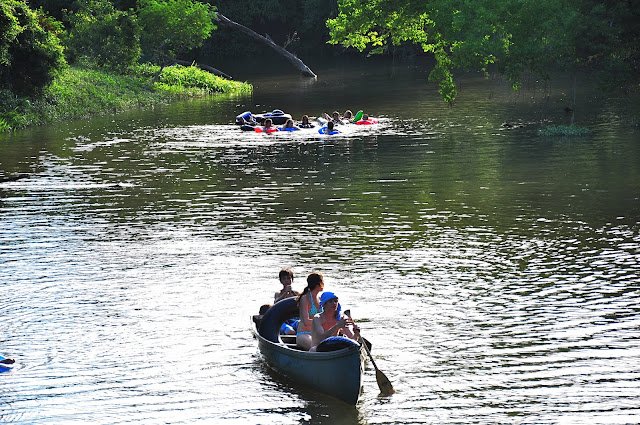 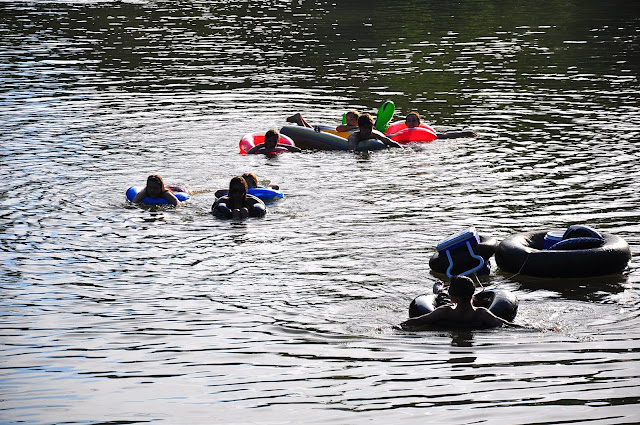 Can you spot the alligator????? 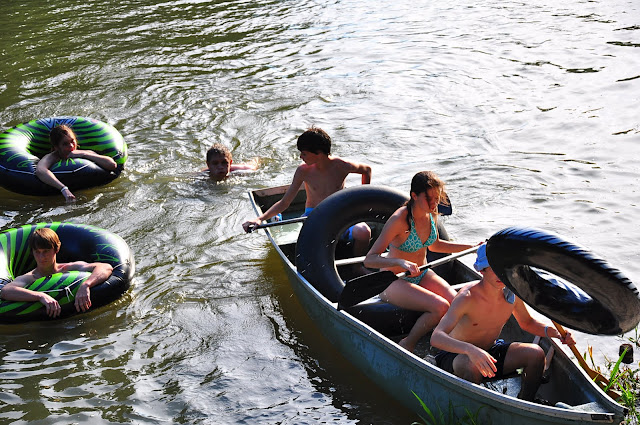 What you can't see it?  It is right there - Have  you had your vison checked lately?
Ok - I am teasing...even I would not let all these children in the water with a gator in plain sight. 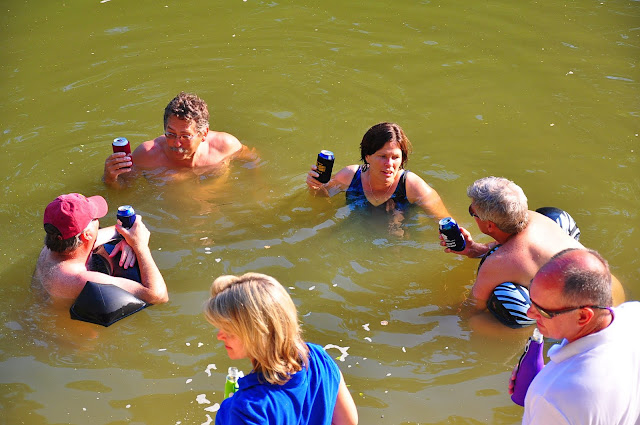 Posted by Only in Louisiana ~ documenting the adventures we call Life! at 9:31 AM