A funny thing happened on the way home from the Endodontist today! 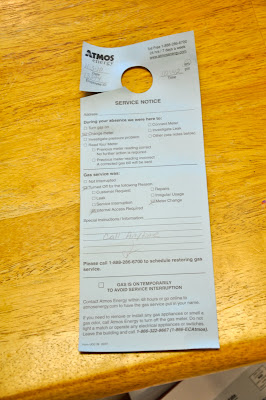 OK....nothing really funny happens either at an Endodontist's office or on the way home.....but that said, this was what we call in our family "a co-winkadink" (coincidence)!  I had about a thirty minute drive home after my appointment, so decided to "call my Mom".  Isn't that what we all want to do when we learn that we: 1)  Have to spend four hours in the torture chamber the next day;  2) Have to spend more than I just spent on my new camera to endure the four hours of torture tomorrow; 3) Have a nagging toothache; 4) Just found out that I need a root canal with a crown on one tooth and possibly another one in the future.  Lets just say ~ my day was not going as well as planned and now that I really know there is a problem with the tooth....why does it hurt more than it did this morning, or last week for that matter.  The power of your brain is strong!  Anyway, I called my mother and decided to ask a very brave question to her:  (after I vented for 20 minutes about why my previous dentist was the cause of all my problems in life) ~ I asked her "what did you think about the elections last night"?  The reason this is a brave question is because I am a die-hard Republican and she is a Democrat.....or maybe now we are Republican'ts and Demadon'ts.  Regardless.....I would only dare pose this question to her while I am on the phone ~ 500 miles away!  So, after some good discussion, she stated a fact that we both agreed on....you can't blame President Obama for not regaining a lot of the lost jobs in the nation....some of the jobs are gone because of the fact that technology is taking their place.  I was pulling into my driveway agreeing  with her because she was  right.....technology is taking the place of many jobs.  Voicemail and emails have replaced secretaries,   etc.....I was still on the phone as I walked into the house and saw a notice on my door.   I immediately said, "Uh Oh Mom,  I have a notice on my door, I have to go.  Upon reading it,  I discovered that Atmos had removed my meter to change it out and  all of my gas appliances (hot water heater, stove top and central heater) would not work until Atmos came back  out, turned on the gas and re lit the pilots.  The notes said "Call anytime" to the 1-800 number ~ so immediately, I did!  After jumping through hoops, and saying Operator to the recorded voice over and over, I  got a recording that said all operators were busy and the wait would be fifteen minutes or you could input your call-back number.  They would then call you back when it was "your turn in line".  So I did, and thank the lord, I did get a call back. Cold showers, at a house full of girls who are about to run a cross country meet, are not an option!  The poor lady who returned the phone call:  I lit into her so quickly...how dare they change my meter ~ without notifying  me ~ while I was gone ~ getting really bad news at the Endodontist ~ and leaving me without gas at all and no assurance of when it would be turned back on.  I explained to the women that I could only be home for another hour,  because I had somewhere I had to be..... 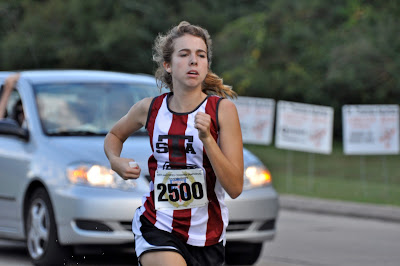 Watching two of my favorite girls 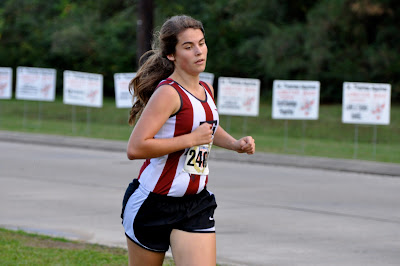 Run their hearts out in a muddy, soggy three mile cross country race! 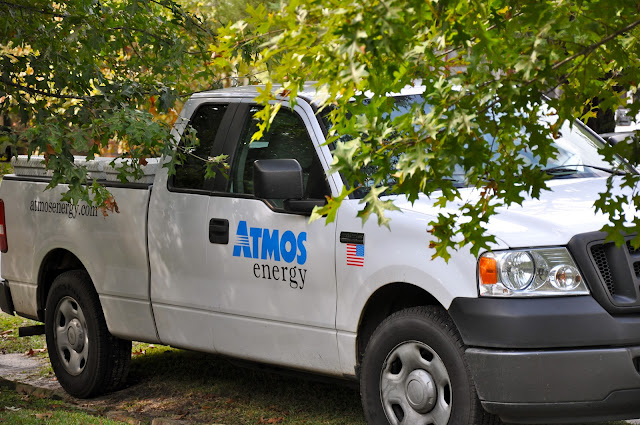 Her response was as expected (trust me, she is one of the last live voices left at a 1-800 number ~ another example of how technology has replaced jobs) and she said, I will send the order, but if he comes and you are not there, the order will be canceled and you will have to call us again (now, that is a fate worse then death!)  I flat out lied to the live voice on the other end of the line and said, "Guess what, I will now be here all afternoon.......please send him ASAP! Finally, thirty white knuckled, clock watching minutes later, the Gods smiled on me ~ and look what pulled up to my house!  Things were looking up! 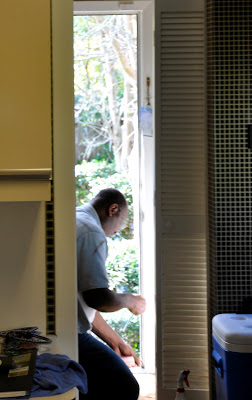 He was a very nice man and got right to business.....he lit the stove pilot and here he is lighting the hot water pilot.  I, very unobtrusively, snapped this photo.....praying he didn't know I was photographing him  and think I was the creepiest thing ever! (By then ~ it had dawned on me that this was to be my next post!) Thankfully, he got it all going in time for me to make the girl's race but right before he left, I casually asked "So, why did they change these meters?"  He replied, "Oh, we are replacing all the meters in this neighborhood with electronic meters that can be read from the office".  And I thought..."Score one for Mom, technology just worked him out of a job". 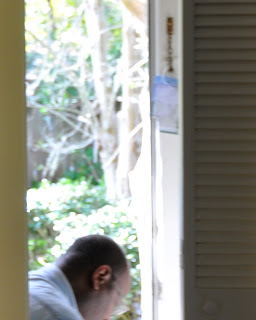 Post script to this post ~ we are now out of or can't find our duct tape (read "Just wondering?") and
look what poor Ellen had to do to hang a reminder note ......a plastic tie looped through a piece
of paper and hung on the chain lock....give her credit for ingenuity!

Posted by Only in Louisiana ~ documenting the adventures we call Life! at 8:20 PM