What a week ~ and it is only Monday! 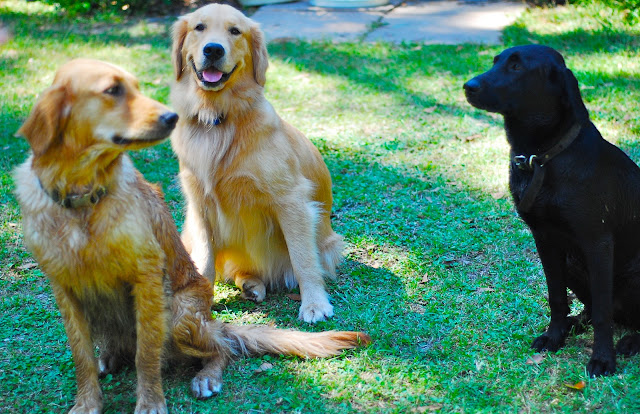 It is only Monday morning and I am already tired!  There is soooo much going on ~   not only the our household, but also the other members of the family!  First let me share what is going on in "Wild Kingdom". 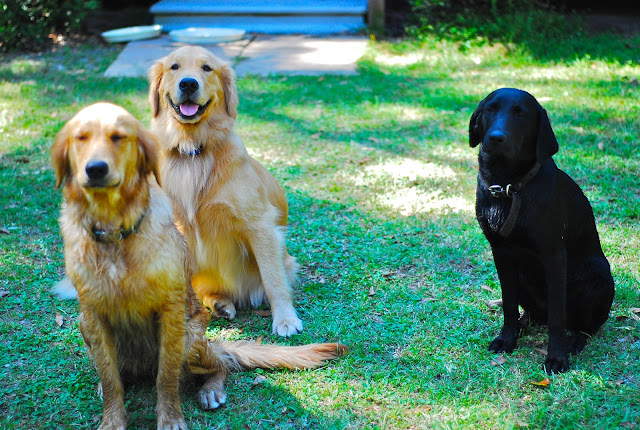 I once read the book "The Red Tent" for a book club that I belonged to....it is about ~  how can I delicately put this ~ how the women of biblical times were banned to a special area of the compound when it was "their time of the month".  In this particular book, it was an elaborately decorated tent and it relates the special times these women had during their week's visit to  "Red Tent".   Well, do they make "Red Dog Houses"?  It is that "time of the year" for all three dogs and it happened at the same time.  If they think women who live together sync their cycles.....someone needs to do a study on my dogs.    Dogs are lucky as they only go through this nonsense two times a year and I guess I am thankful that it happened at the same time so they can all be on "lock down" together.  The reason that it is such a pain and EVERYONE I know get their dogs spayed is that: 1. It is messy ( not going to describe this one, use your imagination - lets just say they don't make feminine products for dogs); 2.  It lasts every bit of two weeks and sometimes three;  3.  Like women, they aren't themselves and don't behave as you have trained them...multiply this times three and it equals problems; 4. Their instinct is to "look for a man" so you have to be ultra careful to only let them out of the house when every gate is on maximum security lock down and they are on leashes; 4. Every dog for miles "comes a courtin" and my dogs would love to go on a date with them.  We will hardly ever see another dog roaming around and when my dogs are in their womanly way, they come out of the woodwork. Apparently the "scent" carries for miles and can you imagine when it is three times as strong.  One time, way back when,  I took a lab that we owned named Killington (who was in heat)  jogging.  By the time I returned, nine...nine male dogs were nipping at our heals! I ran like the wind that day!  Fortunately, we have a fence that in fairly good at keeping intruders out and crazy, love struck dogs in, so if we all are ultra careful NEVER to leave a gate open, the prospective doggy fathers have a pretty big challenge in front of them.  However, there are always those male dogs that missed their opportunity to enroll in the "agility dog classes" and are able to make it over the fence.  Hence, the rule that each dog needs to be on a leash when we take them out of the house into the yard!
And in the words of Forest Gump....."that's all I have to say bout that"!

Oh, some of you may be wondering why we put ourselves through this torture on a routine basis....we have beautiful registered golden retrievers as well as a registered lab and we want to breed them with "beautiful registered males" one day ~ (not the poodle down the street).  One of them is old enough to breed but the other two are two teenagers that are not to be trusted for these two weeks! 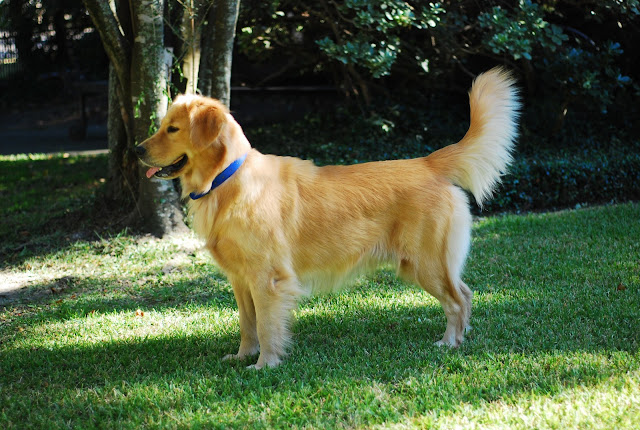 We are caught a bit unprepared but if we can find a suitable husband, we would love to breed Maisy.  She is so gorgeous ~ This photo was taking of her just standing in the yard....if she were a person I am sure she would be Ms. America by now! She always looks and acts like a prima donna! In every photo she even looks like she is "smiling"!  Go back and look at the photos above ~ the other two are enduring the photo shot....Maisy has a perma-grin on her face.

Secondly on the menagerie front: 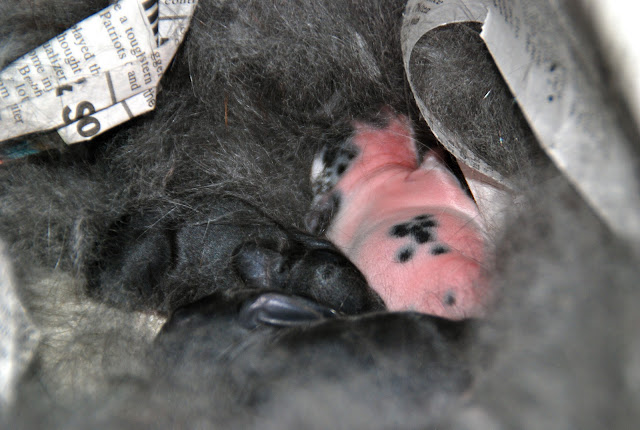 We have two new litters of baby rabbits!  Most of you know that Ellen has owned and operated "Hoppy Days" for two years and is one of the main wholesaler of rabbits to our two local "Feed and Seeds".  She is quite successful and makes a good bit of money for a sixth grader ~ actually, for anybody ~ all while having a lot of fun doing it!  I can't deny the fact that I love it too, and still get excited whenever a new litter of baby bunnies are born. 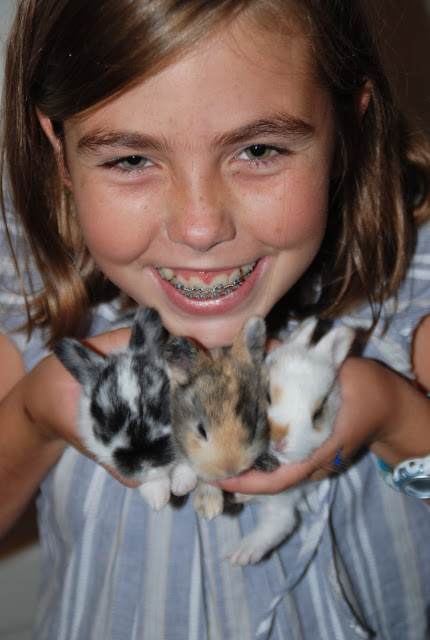 You have to admit....always having these little guys around (along with that cute little girl) to play with is so much fun! 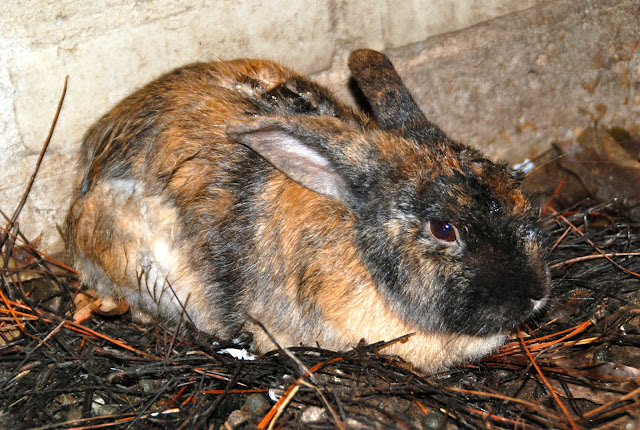 Ringo ~ our rabbit that likes to live life wild and free (I am fairly sure he was a hippie in a former life) had another close call!  Ellen has had Ringo for several years and the reason she isn't $10.00 richer because of him is that he was featured with Ellen on the cover of the Baton Rouge Magazine when they named Ellen the "Young Entrepreneur of the Year"!  After that she couldn't bear to let him go and he became a permanent member of the bunny family.   She noticed that Ringo would always stand on his hind feet with his two front legs on the door looking like he was saying "PLEASE LET ME OUT".  None of the other thirteen rabbits did this and after a time, Ringo's silent pleading wore Ellen down.  She asked me if we could let Ringo run around the fenced in area that enclose her rabbit cages and I said yes; if you are prepared for the fact that he may leave and not come back.  She felt his desire for freedom was more important and even if he ran away "he would still be free, right?".  She took the chance a year ago, and he is still with us!   He stays in the fenced in area most of the time but occasionally hops over to a neighbor's yard to give them a bit of thrill.  We get lots of calls about "Ringo sightings"!  But he always comes home!  The only problem is when he happens to be in the yard at the same time as Libby ~ we try to check the yard before we let her out, but we have had two close calls ~ one of which was yesterday.  Ringo used the second of his nine lives. 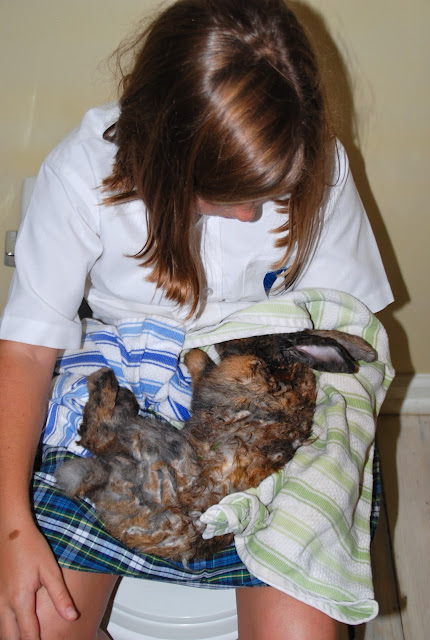 We found Ringo literally in Libby's mouth as she was happily trotting around in they yard with her new playmate.  It was a hot day and after checking Ringo over, we realized, he was just overheated and scared.  So we soaked her in cool water in the bathtub and Ellen held him for hours....slowly, he came back from a limp rabbit in complete shock to the happy-go-lucky, free spirit that he is.  By the next day, he was back to roaming the neighborhood. So, we vow to really try and keep Libby and Ringo apart as I know now of two lives he has used up and who knows how many more close calls that we don't know about.  We just can't bear to put this free spirit back in a cage ~ he is named appropriately~ Ringo (after
the Beatles's drummer!) 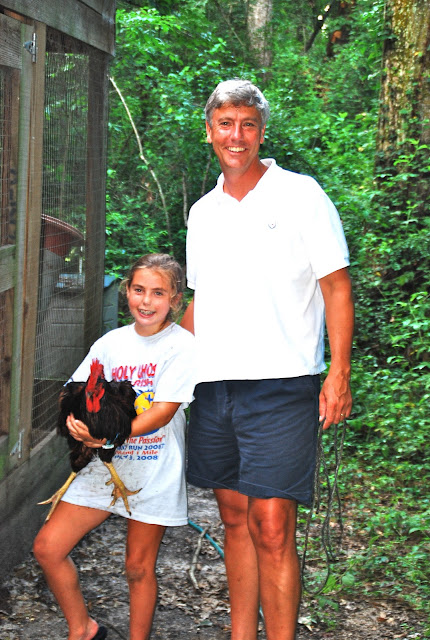 While searching for some cute pics, I saw this one, so I had to pop it up.  As I mentioned at the top of the blog, Gary really doesn't get enough face time or credit on this blog.  There are many reasons for this.....first of all, he works really, really hard and often is not around when I am snapping pics, secondly, because, unlike me.....he is a private kind of person.....being featured on my blog is probably his worst nightmare so I don't do it often.  However, he is a huge part of our lives and after twenty two years, I always look forward to him walking through our door and love the time we spend together!  Now, he probably won't be happy with me putting that "out there", but he is so darn cute that  I had to do it!  He is the greatest husband and father I know, so there it is....out there for the world to know!  Well, realistically, all seven followers that I have and I suspect two of them were created by my children as they felt sorry for me when they saw my "small" selection of followers! 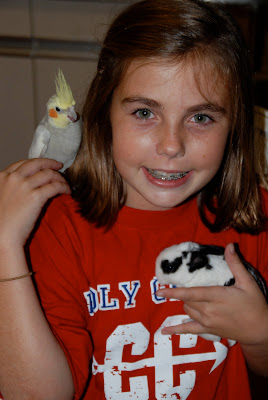 Felix update ~  He has really become a tame cockatiel and now rides around  on Ellen's shoulder with ease.  You will catch her doing her homework, eating a snack or doing many other activities with her little friends!

Well, now I don't have time to finish all the happenings that are going on in the other two girls lives...but I will leave you with another teaser.  It is homecoming week, and I am going to try to document  all the crazy, fun and carefree things that happen this week ~ for many of us it, it will be a reminder of our crazy teenage days.....as fun as babies are to have in the house, the teenage stage is so full of life, energy and crazy fun!  On that note, I am off to straighten the house as some of the teenage folks are coming to practice "swing dancing" for the unofficial dance contest during the homecoming dance on Saturday! 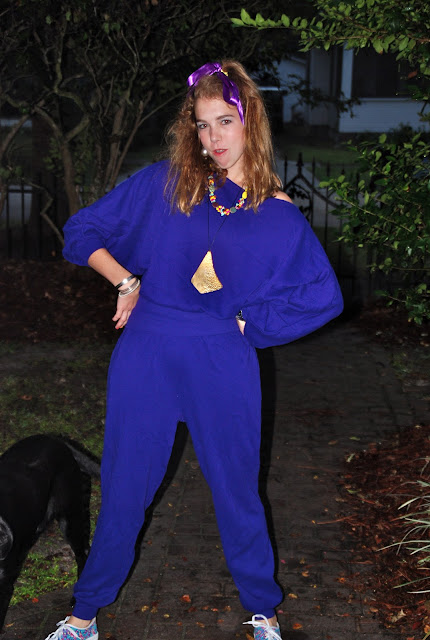 It is "Decade Day" today for Homecoming week.  The seniors are dressing like the "80's" and Elizabeth has a real life warm up suit that she found at her Grandmother's house in TN last time we visited!  My mother had two of these beautiful work out suits, but quickly lost them to Elizabeth and Sara as they "love" the 80's fashions!  The are are vividly bright colors with the oh, so sexy, off the shoulder cut.  The big brass pendant hanging from her next is mine.  It was on a nice, big, clunky necklace that has since broken over the years....OK, I admit it, it was a prize possession of mine!  Elizabeth managed to make it work by hanging it on another necklace. Lots of makeup and crazy hair.....she looks like pictures of me and my friends from my yearbook! 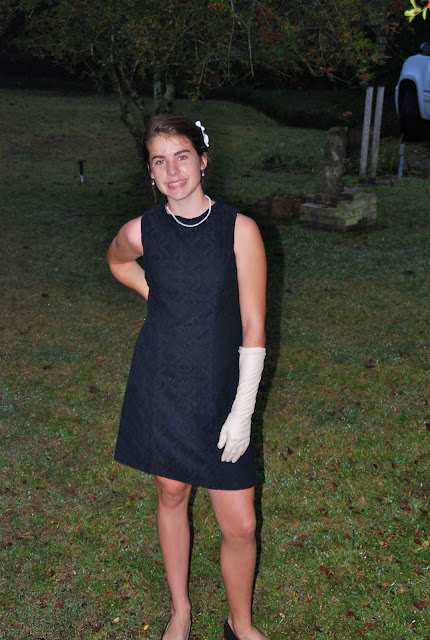 On a more elegant note ~ Sara's decade was the 60's......Since I was a babe in those years, we have no fun hand-me-downs so she went for the Audrey Hepburn look!  My Mardi Gras ball white gloves paired with my cute black dress and her gorgeous hair came together nicely and I think she pulled it off!

College Road Trip coming soon.....I promise.  Unless something from
Homecoming week trumps it!

Posted by Only in Louisiana ~ documenting the adventures we call Life! at 11:23 AM