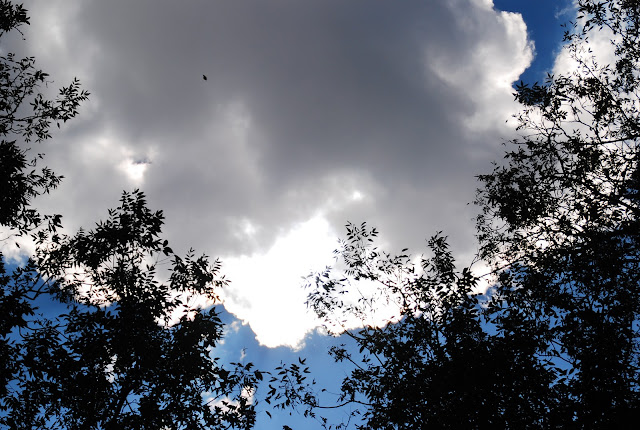 For those that know me personally, it is no secret that Elizabeth has had a tough year.  If you asked me what I saw the most of during the last year, my answer would be the inside of a doctor's office.  It has been year of frustration, worry, sleepless nights, endless hours of playing "Dr. Google", crying on friends and family's shoulders, days of hope and days of despair.  It was a long path, from doctor to doctor until we finally (still hoping) may have some answers.  The reason I have no pictures of this is because some things in life don't need documenting; they will be forever etched in our memory.  Without going into too much detail ~ we would be here all day ~ she is on the road to recovery.  It began last summer with severe "asthma" like symptoms....so we saw a physician that specialized in asthma & immunology.  After we tried every inhaler invented, daily breathing treatments, oral steroids, z-packs and anything else the doctor could think of, he started testing.....and testing and testing.  When he couldn't figure it out and her lung function kept declining (at some points down to 30%) he referred us to other doctors and specialists. Two bronchioscopes were done ~ one at Johns Hopkins.  To make a long story short, a chronic bacterial infection which antibiotics can only keep at bay, have left her with chronic obstructive lung disease.  She missed over fifty days of school last year, was unable to get out of bed for weeks, and when she recovered enough to resume physical activity, exercise was out of the picture.  For someone who was ranked 8th in the state two years ago and has five state championship rings, it is a hard pill to swallow.  Some of the doctors wanted her to take an intensive intravenous course of steroids over several months, but my gut (or my God) told me that was just not the right thing to do.  Gary and I discussed it and we decided to keep working on another solution. On one hand, we were desperate to cure her, but the thought of steroids and the damage they can cause long term was daunting.  It would be our last resort.  Our instinct (or the man upstairs) was right....out of all the doctors we saw (which were numerous), one doctor (an immunologist) suggested we try immunoglobin therapy and if that did not work, we could revisit the steroid therapy.  I knew nothing about immunoglobins but in a nutshell, it is like a blood transfusion but instead of blood, it is plasma that has been spun down to leave only the antibodies.  Antibodies are what your body makes when it is fighting an intruder such as bacteria or a virus.  The catch: getting our insurance to approve it ~ it is an incredibly expensive treatment.  My wonderful doctor went to battle for us and after two months of working with the insurance company, providing countless tests and lots of paperwork and sometimes staying on the phone with them for hours finally got it approved.  We were hopeful but having tried so many different treatments over the past year, we were skeptical.  However, the side effects were less harmful then those of intravenous steroids so we decided to go for it and give it a shot. 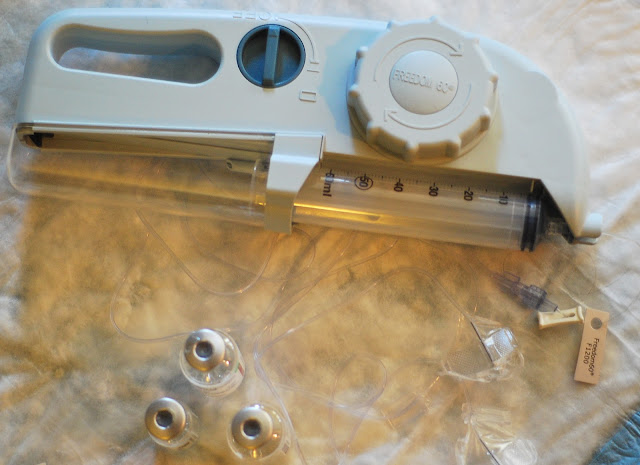 We started with a five hour infusion in the hospital and followed up with weekly infusions that I have been taught to do at home.  Those are done once a week and that takes about two hours.  That was about five weeks ago......the effects have been dramatic.  I have been too afraid to believe that it is working...but it is!  Every week is better then the last and she is even able to exercise now.....her spirit, vivaciousness, color, energy ~ they are back from vacation! She is still on mega doses of antibiotics, but if she continues to thrive, they will take her off in the upcoming weeks. 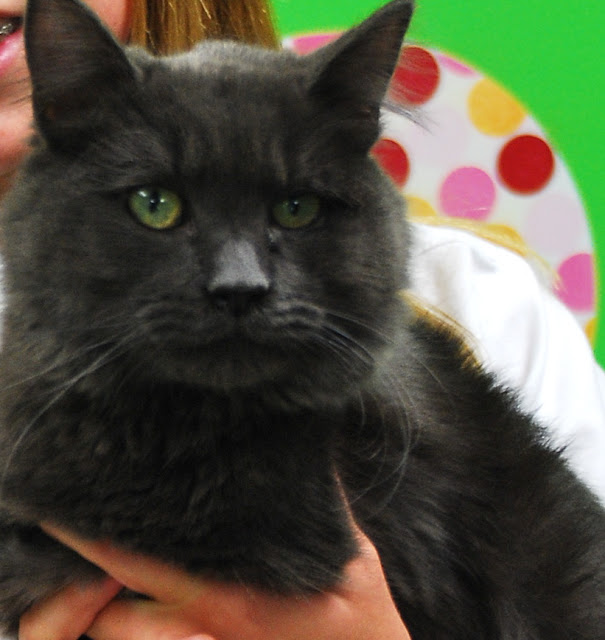 I debated posting this; but it is information that needs to be shared to see what is so special about what I am sharing with you today.  Last May, when she was so sick. she asked me: "Mom, just what am I going to do next year?  I have always participated in sports and all my friends will be at practice and I will have nothing to do after school or on the weekends." 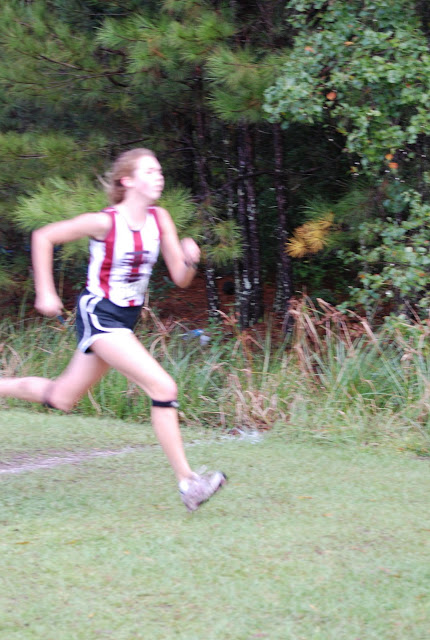 This was true.....cross country, track and soccer took up the majority of her time and all her friends were on the team.  There was a pit in my stomach....not only about her health situation (I lived with that pit in my stomach) but also her uncertain future......what would she do her Senior year?  We talked and I said "Elizabeth, I don't know what will happen next year but I can tell you this ~ when one door shuts another opens....you just have to look for an open door."  We started talking about all the things she had wanted to do but never had the time to do because of her busy practice schedule.  She is so talented in art, loves animals and wants to be a vet.  We talked about art lessons and she came up with attending Karate (random, but something she has always wanted to do!).  It got so random that the idea of opening the first outdoor drive-in theater was at the top of her list. As we continued to discuss the realistic options, an idea formed: she could do something with animals at the local shelter......this idea interested her the most. 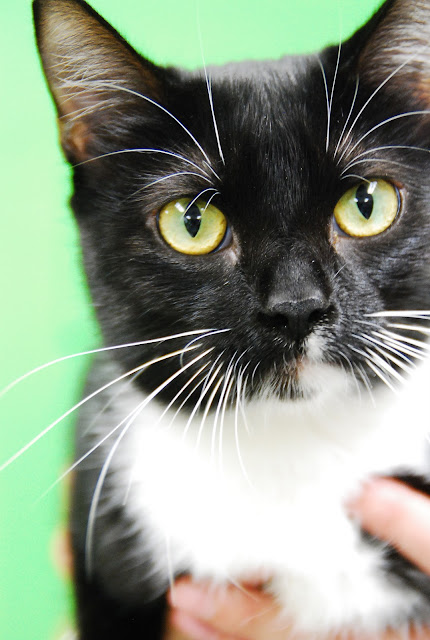 When we returned from Johns Hopkins, we drove over to the animal control center. As I was unsure of what they would let a seventeen year old do, I told her not get too excited.  However, we were both pleasantly surprised....the shelter was immaculate and freshly painted, the animals well cared for and the director ~ he was awesome.  He gave us the grand tour, explained his successes and failures and what he needed to help the shelter. 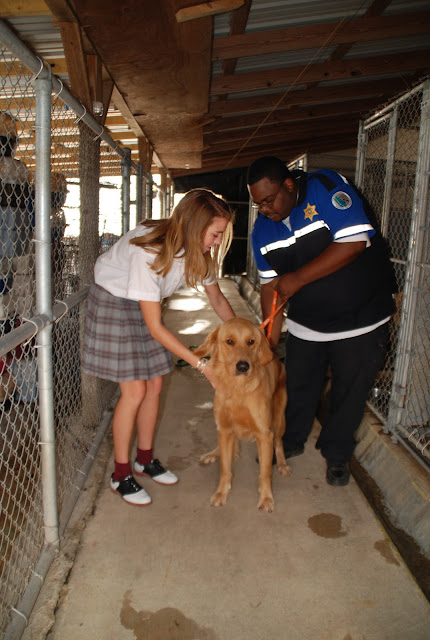 Elizabeth and I left there with two feelings; one being WOW, we weren't expecting to be so impressed and the other...what can we do to help.  After long discussions with not only each other but the whole family and her friends..........
Tangi Cause for Paws, was born. 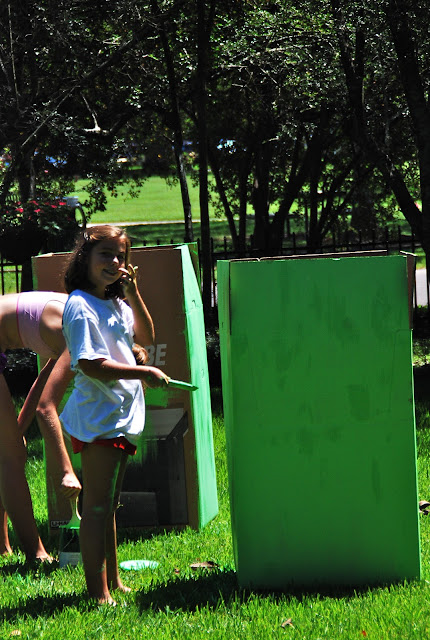 Elizabeth and her sister painted five foot boxes bright green and decorated them with pictures and details of the items the shelter needed.  She placed the boxes in schools, the local fitness center, feed and seed and PJ's coffee house. 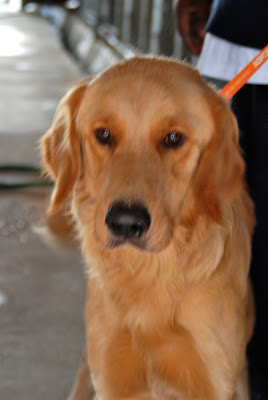 She arranged to speak to the elementary school of 800 students and even had animal control officers bring a dog (a beautiful golden retriever that they named "Shaggy"). 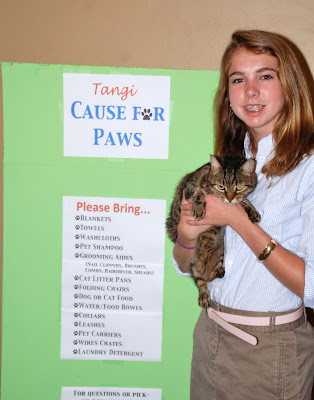 During the morning assembly in the gym, she addressed the children and asked them to "fill the box" with items like dog and cat food, bowls, grooming aids,  and old towels and blankets.  She asked any child who wanted a pet to adopt from the shelter and if they already had a pet to bring in supplies. 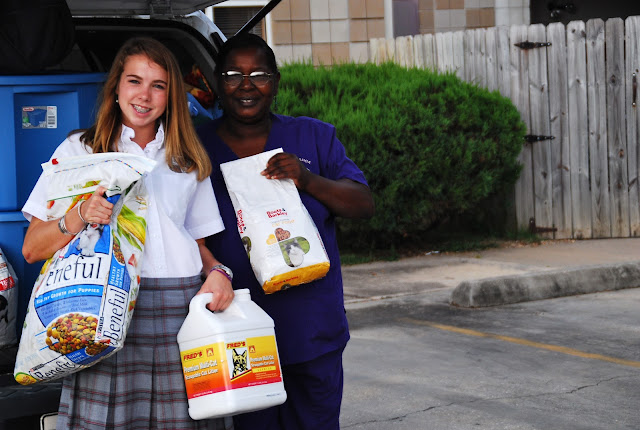 For the last three weeks, the box has been overflowing and she has already delivered over 500 items to the shelter ~ Her car is stuffed to the max when she delivers the items!  On Wednesday, October 13th, Chili's restaurant is donating 10% of the profits to the animal shelter if whomever is dining either brings a flier or mentions the shelter!  She has been featured twice in the newspaper and the Catholic Commentator interviewed her yesterday!  It has taken off like wildfire and kept her very busy doing something she loves! 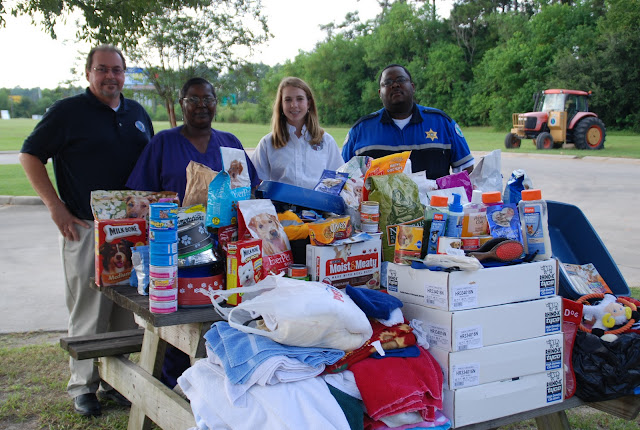 It is our open door!

Things are so good right now.  I was talking with my Mom in disbelief of how well everything was going and how quickly the infusions were helping her to turn around.  My worry now was that everything was going too well and the "boom was going to drop soon".  She said something wise (Moms just seem to know how to do that) ~ it totally put me at ease and took the fear that was hovering above me away.....she said " Maybe the boom has already dropped and this is the silver lining to a dark cloud".  It was like someone lifted instantly lifted a weight off of me......I am at peace now and am just going to enjoy the moment ~ which hopefully will last a long, long time.

Posted by Only in Louisiana ~ documenting the adventures we call Life! at 7:59 AM

Email ThisBlogThis!Share to TwitterShare to FacebookShare to Pinterest
Labels: Animals, Cause for Paws, Elizabeth, Medical