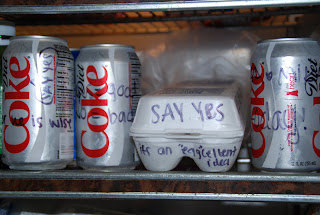 I have been wanting to write about this but in the hustle and bustle of life did not get around to it yet....however, yesterday Elizabeth burst into our room breathless with excitement~Mika had replied to her facebook email. Now, to backtrack......several months ago, Elizabeth announced to Gary and myself that they (she, her sister and several friends) were going to attend the Mika concert.....in Los Angeles, California! We just let her explain the plan, in which she had already checked flights, made arrangements to stay at a friend's house and would "just take a cab to get wherever they needed to go!" For anyone who doesn't know who Mika is and is feeling very old at this point....join the the club! Mika is an artist from England that, according to Elizabeth and Sara, is one of the top ten artists world wide but is not well known in the United States because he has not done a concert tour here...until now! So.....we listened to the well thought out but completely ridiculous plan of "LA to L.A" and told Elizabeth and Sara that it just wasn't going to happen despite the fact that they could pay for it themselves! Note to self.....quit encouraging your child to save money! You would have thought it would stop there, but NO...........they figured out that he was playing in Philadelphia and "Plan LA to L.A. became "Plan LA to PA"! The new plan was to fly to Pennsylvania and have Aunt Julie pick them up, take them to the concert and then they would fly home the next day as this concert date was on a school night.....this was the new and improved, much safer version! The morning, after Gary and I were presented with Plan Number Two, we opened the refrigerator and saw all of our Coke cans and egg cartons decorated with subliminal messages......on one can the C and the E were scratched out so OK was visible; other cans said "You wouldn't deny God, why would you deny Mika? Mika is good....No is bad; say Yes, it is an "egg"cellant choice and on and on! Trust me they pulled out every trick in the book to convince us to let them go! In the end, good parenting won out but the spirit of adventure that lives inside both Gary and I really wanted them to go! Privately, we would discuss it and say that it makes no sense, is too dangerous, cost too much money and is not feasible but a small part of us wanted to say what the hell, they are great and accomplished girls, you only live once and wouldn't it be great to be sixteen and get to fly to a concert that you desperately want to attend. Even Aunt Julie got on board and was waffling with us! However, hard as it was, we had to make the right decision and Plan LA to PA was DOA! This all happened about a month ago......but Elizabeth being the number one fan that she is, found Mika's real facebook account. Although you couldn't request to be his friend (he doesn't have that option), you can send him a message. So, she did.......just a friendly message that described how she tried to attend his concert but that "Mom" (why does Dad never have to take the rap?) wouldn't let her fly to his concert in LA and that it sucks to be sixteen; however, she hoped his tour in the United States would be great. She signed it "Love today"~Liz. That is the title of one of his more popular songs. Whatever she said got his attention, cause a month later, she got a one sentence response from him (or his secretary!) which said..."Well, thanks a lot, tu es Divine!" French is his second language according to Elizabeth! Regardless, it not only made her day, but her month and her year! And, it reminded me to document this whole experience! One day, mark my words, she and Sara will attend a Mika concert......maybe I will go with them!
Posted by Only in Louisiana ~ documenting the adventures we call Life! at 8:48 PM