Halloween - never too old to dress up 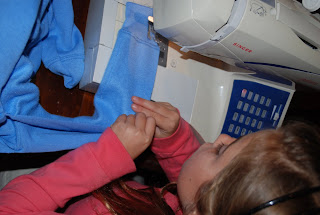 This year Ellen decided she wanted to
be an Octopus and she saw an idea that was
in Family Fun magazine that she wanted to
try. It involved buying a large hooded sweat shirt, cutting strips and sewing them to make the "legs". Last but not least, she colored black dots in the middle of those stick on circles that you use for pricing items at garage sales, and glued them onto the legs to look like the "suckers". I was a bit skeptical but the overall effect worked. 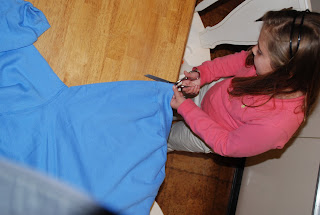 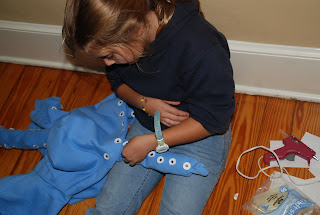 Gluing on the "suckers" 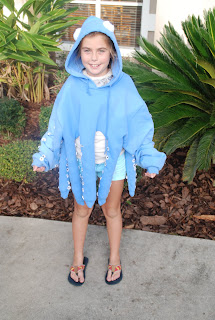 The finished product! She made the eyes out of starfoam balls. What the picture doesn't show is the fact that it was about 90 degrees and of course we have to pick the costume that is made out of a sweatshirt! 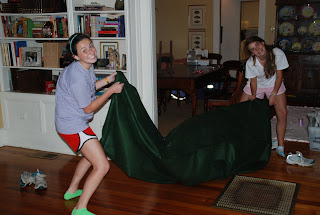 This was created from the mind of Sara! They bought a 30 foot piece of felt and made a tube out of it. 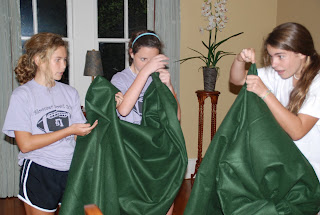 Then they sectioned into four sections 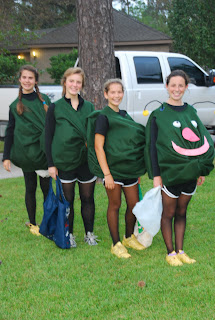 Bet you didn't see this one coming! It was a very cute costume but it did present one difficult problem........can you guess what that was? It involves bathrooms!

Last year the girls were a bit hampered by the fact that Sara had just had knee surgery, but that didn't stop them. Sara just donned her hospital gown and Rachael dressed up as her Doctor....
Dr. Do Fuss! (Dufus). Ellen was a package of jet puffed marsh mellows....when she came home and announced that was what she wanted to be, it took a bit of thought to pull that one off. We got some visquine from Home Depot, stuffed it with small blown up white balloons and then we googled the brand name of Kraft jet puffed marsh mellows on the computer and printed it out. One of my personal favourites is the "dress up box" that Rachel is wearing as well as Sara in the shower! The "trick or treat" pumpkin bag was pretty clever too......Laura took a Halloween trash bag, taped it to a Hoola Hoop and made it look like it was full of candy. These girls have a long history of making creative costumes! 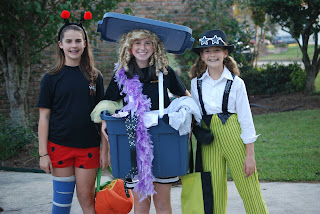 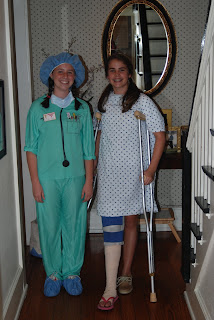 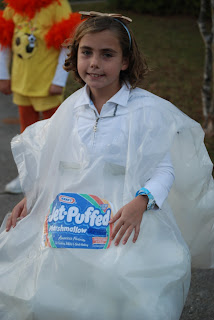 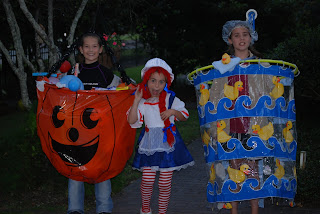 Posted by Only in Louisiana ~ documenting the adventures we call Life! at 11:59 AM