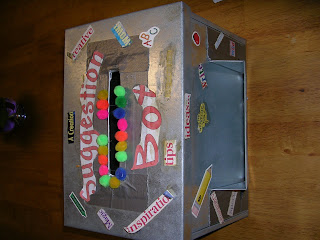 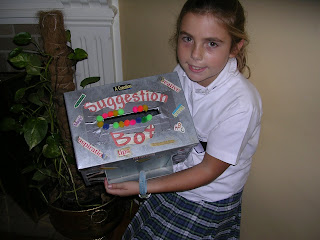 After a heated campaign, Ellen came home today the proud "Student Council Homeroom Representative" for her class at Holy Ghost. This campaign has all the elements of what Obama went through to become president; pins, slogans, posters, and a speech full of promises to be the voice of your class at the student council meetings and "to make Holy Ghost an even better school"! As in real life....dirty politics come into play.....signs are taken from the cafeteria and moved into bathroom stalls, names are "X'd" out, not so kind faces drawn on different pins....it is an all out war sometimes. The campaign starts on a Monday, continues all week and the students who are running get to school early to frantically hand out their "slogan pins" to the masses. It is not unusual that week to see a student with no less then twenty pins attached to various parts of their uniform. If your envisioning glossy round pins with awesome graphics on them....think again. Picture rudimentary slogans run off on home computers, hand cut with scissors, rumpled, creased and torn by the time they make it to school, and held on with a safety pin! Ellen was at a disadvantage as she suffered a bout of the flu on Monday and Tuesday and had to miss campaigning for the first two days . She dragged herself to school on Wednesday just so she could get some of her pins out! We were not without a "slam dunk" slogan this year, although it came to us in the ninth hour! Her slogan was "Everybody scramble, vote for Ellen Gambel" and here was the clincher.....she took old plastic Easter eggs and tucked the pin inside the egg. On the outside of the egg, she wrote in Marks-a-lot....Vote for Ellen, an "egg"cellent choice!" Her competition was steep.....she ran against two boys and two girls and that is out of a class of twenty three! Our big worry was that the boys would block vote! She came home today and said "Well Mom, they announced the student council winners and I did not....long pregnant pause.......lose!" Such a cute girl she is. Both Elizabeth and Sara began their student council careers in fifth grade as Homeroom Representative and ended in 8th grade as President, so she has a legacy to follow. The box above is the original "suggestion box" that we had made for Elizabeth when she won her election in fifth grade. They are supposed to decorate a shoe box and put it in the classroom so students can slip in a suggestion they would like to have their rep present to the meetings. You know, important stuff like; more pizza days for lunch, ankle socks instead of crew socks, have a pajama day......I am going to save the suggestions this year cause you really do get some funny ones! Anyway, back to the box.....when Elizabeth had to make a box, we thought how cool would it be if we could get our sheet metal mechanic at General Heating to make one for us. The whole family (OK, really Gary) designed it and I gave the drawing to Bob, our sheet metal mechanic, who in turn produced the best suggestion box Holy Ghost has ever seen! It even had a place on the outside to hold the suggestion cards. Elizabeth decorated it and used it, and when Sara won Homeroom rep., it was handed down to her. Today, we drug it out of the attic, dusted it off and now Ellen is ready for suggestions! The box has even more meaning to me as Bob was suddenly and tragically killed in an automobile accident shortly after he made this for us. He was a great guy.....one of those people who go above and beyond the call of duty and I will always remember him. Here is an example: One day, our friend Tommy, (who loves to cook) was telling Gary about a "Cajun Microwave" he had seen at a sports show. To help him describe it, he sketched a drawing of it and was wondering if he made it, could General Heating make him a sheet metal top for it? Gary popped into the shop, left the drawing for Bob as he wasn't in at the time and kind of forgot about it. Now, I had no knowledge of this but at some point, several days after Gary left him the drawing, Bob saw me and told me Gary's "project" was ready. He had assumed that Gary wanted him to make the entire drawing (not just the top) out of sheet metal! A Cajun microwave is basically a square box with doors. Inside are several racks for the food to be placed on and at the bottom is a large pan for water. You put the meat on the rack, water in the bottom pan and then you start a fire on the top of the box (which is why you need a sheet metal pan on the top). The fire heats the inside enough to make the bottom pan of water hot and the meat inside is steam roasted. It really works well and is perfect for the country when you want to serve a big crowd! I will have to take a pic and post it here sometime as Bob made an awesome Cajun Microwave for us. We gave the first prototype to Tommy as he had requested the "top" and he raved about it so much we had to ask Bob to make another for not only us but also Gary's parents! Anyway, to shorten a long story, Ellen winning homeroom representative is poignant and sentimental for many reasons! I will never look at that box without remembering Bob and we now enter another era of "Holy Ghost Politics"!

Posted by Only in Louisiana ~ documenting the adventures we call Life! at 2:34 AM