Only in Louisiana - Part Three! 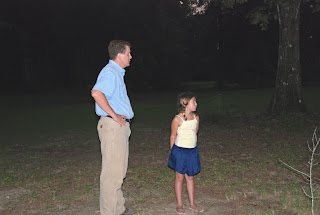 When I started the title of "Only in Louisiana", I never dreamed there would be a part two much less a part three! But, as I said before, you can't make this stuff up! Our next adventures take us over to Steven's house in the country (he and his family have moved back to LA). Having just moved in, Steven had a major cleanup project underway which included weed eating, chopping down trees, clearing overgrown brush from around the house...etc. He hit the jackpot when 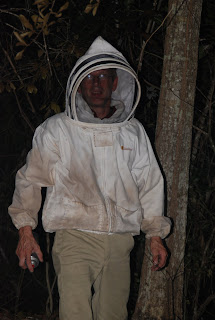 he cleared some bushes over the home of bumble bee that makes
it's home underground. Unhappy about being

disturbed, the bees swarmed their unsuspecting target (Steven) and extracted their revenge! Steven said they stung him all over and he ran like a "scared school girl" straight to the house, but not without being stung at least twenty times. However, Vanessa (Steven's wife) saw it in a completely different light...her version is that Steven looked like a "Ninja" kicking , swatting twisting and turning to fight off the little bad guys. Whatever version is true....the beekeeper vindicated Steven when he said, " If they were yellow jackets or ground hornets, I would remove them without my gear, but this type of bee is a very aggressive, mean bee and hurts like hell when they sting you!" And with that, he donned his protective gear a fumigated them with a fog of pyrimithian (sorry, can't spell that and don't feel like looking it up) as well as spray. The whole process took about thirty minutes and when he was done the bees were so 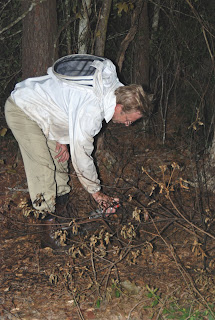 dead that he put his head right over the nest to prove they were not going to sting anyone else! Also, just to prove how tough this type of bee is, Steven sprayed a whole can of Raid on them, poured gasoline and lit it on fire before the bee keeper arrived!


Spraying the bees. I missed the cool picture of him when he was fogging them! He put his head on the ground over the nest to prove they were dead. 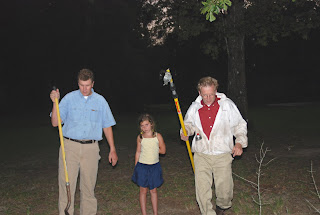 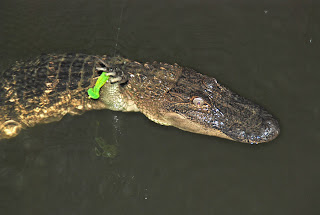 Just when you thought there can't possibly be another adventure involving a Louisiana creature....think again. We have now covered snakes, raccoons, bats, bees and now......drum roll please..........the Alligator!
Gary and his friend Charlie decided to enjoy some night fishing off the back of the "Frankenstein" (see previous blog). Charlie had just cast his rod when he got a big bite! Thinking he had a whopper of a fish, he took his time fighting it in and once it got close to the boat, we 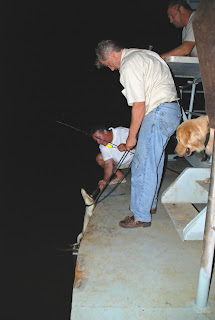 had quite a surprise. It was a four foot alligator
that had accidentally been hooked in the leg with
the lure. Most fisherman would cut the line but not our fearless fisherman! They worked the gator to the boat and tired him out so much that they were able to actually pick him up for a photo op. Now, could that gator have easily whipped his head around and snacked on a finger or hand.......yes, but Lady luck was with us and they walked away with body parts intact and a great photo (thanks to me who stood at a safe distance!) Gotta love zoom lenses! As we have done with all the Louisiana critters I have battled this summer (except the bees), we let the poor fella go once he had been well documented!
The "Gator Hunters" wrangle him in! 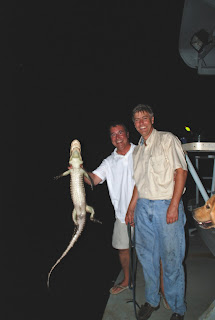 Smile for the camera!
Posted by Only in Louisiana ~ documenting the adventures we call Life! at 9:31 PM