The Zourich -aka The Frankenstein 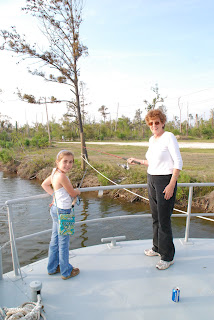 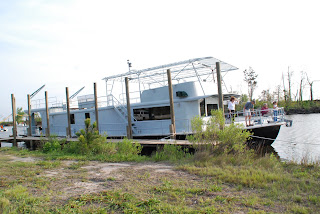 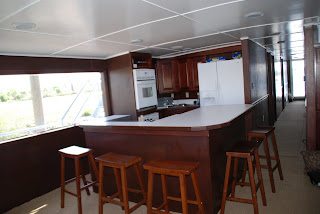 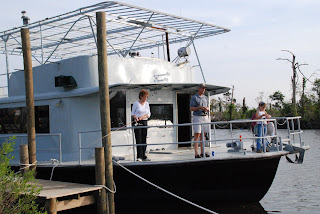 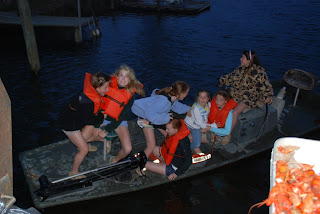 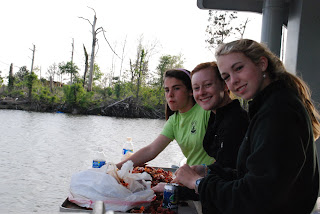 This boat is a barge that we bought with ten partners about 5 years ago.....when we purchased it, it was in great shape with all the amenities you could ask for (wine cooler, washer and dryer, ice maker, leather couches and the owners even sold it with the liquor in the cabinets!) We estimated they left about $2000.00 of alcohol on the boat! The boat was sold by some oil company who just wanted to unload it so it was purchased at a great deal. Well, before most of us had time to set foot on the boat, Ivan (hurricane from five years ago) hit and sank it....we dredged it up and the dredging company actually dropped it again so technically it sank twice. Most of our partners threw up their hands and decided to cut their losses as they didn't want to fool with renovating and all the headaches ahead. So, slowly but surely, we started putting the boat back together....it was about 60% finished and was actually dry docked in Chalmette and lifted out of the water for painting (all 85 tons of it) It is about 85 feet long, sleeps 18 to twenty in beds and has two bathrooms and a full kitchen! Then.....Katrina hit. When the dust settled, we drove down to Chalmette to see if by some miracle, it was OK.....it was nowhere in sight. After months of searching for it by boat, Gary rented an airplane and searched by air.....he found it ten miles away from where it was dry docked (hoisted in the air and secured by huge chains) with the pylons that it had been attached to completely pulled out of the ground and still attached to it. It was sitting on a sandbar half in the water and half out. Needless to say, it was in worse shape than Ivan left it and had been completely gutted by the wind and water. Can you imagine the force that can rip a boat from a dry dock and drag 85 tons of boat ten miles with huge pylons attached to it? For the next several months, every time it rained, Gary and Pat would jet off to Chalmette and boat over the the Boat to see if it could float off the sandbar and be towed home. Three months later, it was still there and then after one particularly hard rain, Gary got the coast guard to two it home. It was a very depressing sight to view but the Gary, Pat and the three other partners left, squared their shoulders and got to work. Two and half years later, you see the final product and Saturday, we all spent the night on it and are enjoying the fruits of their labors! The real name of the boat is the Zourich II (Dick Kelly had a similar boat named the Zourich so this is the sequel.) We affectionately call it the Frankenstein as it is a monster of a boat and every time it dies, it is brought back to life! We plan to enjoy it as much as possible before the next hurricane season starts!

Posted by Only in Louisiana ~ documenting the adventures we call Life! at 9:42 AM